The Reptile Room: Part One

Aasif Mandvi portrays Monty Montgomery in the Netflix adaptation of A Series of Unfortunate Events.

Mandavi said he played Monty Montgomery as if he came from the Adventurers Club in Disney World, as he shared the trait of having an incredibly hyperarticulate but also absurd way of speaking. He said, "There was something about him that was a little bit of a cross between a swashbuckler like Errol Flynn and Gene Wilder as Willy Wonka."

He found that the goatee and mustache helped him fully realize the character, as he started "feeling a little bit El Dorado." He gave Monty a backstory about "perhaps wanting to have a child and never being able to," and felt he was delighted to share his world with the Baudelaires.

He also said that working with the reptiles was difficult. "Iguanas do not care about being actors. They're not interested."[1] 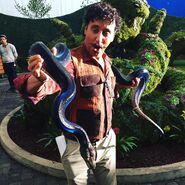 With the Incredibly Deadly Viper