Alfre Woodard is the actress who portrays Josephine Anwhistle in the TV series.

Alfre Woodard was born on November 8, 1952 in Tulsa, Oklahoma, the youngest of three children of Constance, a homemaker, and Marion H. Woodard, an interior designer. She was named by her godmother, who claimed she saw a vision of Alfre's name written out in gold letters. A former high school cheerleader and track star, she got the acting bug after being persuaded to audition for a school play by a nun at her school. She went on to study acting at Boston University and enjoyed a brief stint on Broadway before moving to Los Angeles, California. She got her first break in Remember My Name (1978) which also starred Jeff Goldblum. She lives in Santa Monica, California with her husband, writer Roderick M. Spencer, and their two adopted children: Mavis and Duncan. She was named one of the Most Beautiful People in America by People Magazine.[1]

Woodard was excited to act in A Series of Unfortunate Events, as her children grew up reading the books. She was also happy to do something "inventive and out of the ordinary."

Woodard was able to relate to Josephine Anwhistle due to their shared love of grammar. She expressed that she didn't want to play Josephine in a constant state of fear, and that the fear should surprise her as it came.[2] 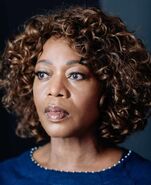 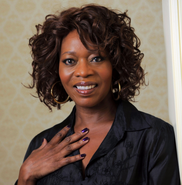 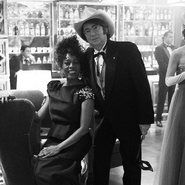