All the Wrong Questions (ATWQ) is a four-part mystery series, plus with a companion book, written by Lemony Snicket, nom de plume of Daniel Handler, set in a formerly seaside town called Stain'd-by-the-Sea and featuring an almost thirteen-year-old Lemony Snicket attempting to unravel a conspiracy.

The prequel series to A Series of Unfortunate Events made its debut on October 23 2012 with the first book, entitled Who Could That Be at This Hour?, and concluded with the release of Why Is This Night Different from All Other Nights? on September 29 2015.

Much like A Series of Unfortunate Events, All the Wrong Questions is set in an amalgamation of ambiguous time periods, likely sometime in the 20th century. Unlike A Series of Unfortunate Events, this series takes place in one primary location, the town of Stain'd-by-the-Sea, instead of changing every book. The town is nearly abandoned and falling apart after the sea was drained away and the ink business and economy collapsed, with the few residents remaining losing hope in their town returning to its glory days. The protagonists of the series are almost completely comprised of children, many of whom were abandoned due to their town's financial collapse; however, due to their age, they are underestimated and not listened to despite their competence. This echoes themes in A Series of Unfortunate Events, where the adults are incompetent and the children are not listened to.

Important locations in the series include The Lost Arms, the town's hotel, run by Prosper Lost, the Mallahan Lighthouse, former headquarters of the newspaper and home of Moxie Mallahan and her father; Hungry's, the town diner which is owned by Hungry Hix and is the workplace of her nephew and Lemony Snicket's associate Jake Hix; and many other spots around town. While the bulk of the series takes place in Stain'd by the Sea, each book features different central locations, such as Wade Academy in Shouldn't You Be In School? or the Thistle of the Valley in Why is this Night Different from All Other Nights?

The series begins with Lemony Snicket, who is "almost thirteen," being transferred to Stain'd-by-the-Sea for his apprenticeship under S. Theodora Markson in order to keep him out of a museum heist with his sister. While he initially does not want to be there, he eventually uncovers a conspiracy involving a mysterious black statue, a drained sea, and a runaway girl with eyebrows curved like question marks and a smile that could mean anything.

All the Wrong Questions is an homage to (and at times, a satire of) the Noir genre, which is defined as a crime fiction subgenre with ambiguous morality and tragically flawed protagonists. The series fits into the genre through its flawed, and sometimes unreliable, narrator, an exploration of corrupt systems, moral quandaries and complex mystery. Several other stories from the genre are referenced throughout the books, with the hunt for the Bombinating Beast Statue calling back to The Maltese Falcon, and the final book's plot drawing a parallel to Murder on the Orient Express.

The series also offers a deconstruction of the genre; a common trope in noir is that most characters are full of despair and never find a happy ending, and while Snicket's own journey is left ambiguous, several of his associates cling to hope despite the circumstances, determined to one day make their town great again, such as Moxie Mallahan continuing the newspaper on her own and Cleo Knight running away in order to continue her experiments. The character of Ellington Feint also seems to be a deconstruction of the femme fatale trope; Snicket even refers to her in her official bio as a "personne fatale." After she initially deceives Snicket in an attempt to steal the statue, Snicket continues to see her as a mysterious and cunning adversary, often describing her as a mystery in of herself and, despite wanting to help her, remaining cautious and analyzing her actions as pre-planned and potentially manipulative. However, outside of Snicket's narration, Feint is very open about her motives- her only care is rescuing her father- and often very emotional, showing how she is an unprepared child thrown into her situation, the same as the other protagonists.

The books also draw on similar themes as A Series of Unfortunate Events, such as the criticism of authority and abuse of power, the inherent complexity of the world, and the call to think more deeply about moral quandaries.

When news first broke of the new series, Snicket told the BBC: "I can neither confirm nor deny that I have begun research into a new case, and I can neither confirm nor deny that the results are as dreadful and unnerving as A Series of Unfortunate Events. However I can confirm that Egmont will be publishing these findings."[1] Over the past two years, little information has been available about the new series, due to Egmont Publishing's "fear of jeopardising the final stages of Mr. Snicket's investigations," but Leah Thaxton of Egmont did made a statement about the series: "Usually, I look forward to opening my post. It's exciting to think that I might find a manuscript to bring comfort and joy to any reader. But that morning, when I saw the handwriting on the envelope... Well, how would you feel if you knew you were about to unleash yet more untold misery on the unsuspecting children of this country? We at Egmont can't escape Lemony Snicket's grim story but, for the rest of you, there's time. PLEASE READ SOMETHING ELSE!"[2]

In 2009, Handler revealed that the prequels do "have some overlap with [ASOUE], but it's not a continuation," and that his "new series for older children is about more experiences from [his] own life; it takes place at a time before the Baudelaire children were born." Apparently, the series would be a "highly autobiographical account" of Lemony Snicket's adolescence.[3] On the 1st June, 2012 a sneak peek of chapter one from Who Could That Be at This Hour? was posted by Entertainment Weekly on their website.[4]

On January 25, 2012, Lisa Brown, Daniel Handler's wife, published a tweet with a link to LSATWQ.com, a signup for information about the new series.[5][additional sources needed]

The first message sent in affiliation with the website on 28 February 2012 included the first picture below with the headline Why would anyone want to steal this statue?

The second message, sent on 7 March 2012, included the second picture below with the headline Who is Ellington Feint? It reads, "I saw her smile, shadowy in the moonlight. It was a smile that might have meant anything."

The third message, sent on 15 March 2012, included the third picture below with the headline Where has all the ink gone? It reads, "Qwerty looked at me, his face as blank as one of those extra pages tucked in the back of a book for notes or secrets." 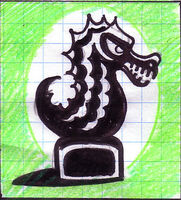 Why would anyone want to steal this statue?

Who is Ellington Feint?

Where has all the ink gone?

The fourth message, sent on 23 March 2012, included the first image below with the headline Drop Everything, reads. It reads, "Watch out for LEMONY SNICKET | March 28 LSATWQ.com"

The fifth message, sent on 28 March 2012, included the second image below with the headline Just a cover until October 23rd? It reads, "Judging a book by its cover is like judging a person for their crimes. You can examine the evidence but you can never know the truth."

The sixth message, sent on 4 April 2012, included the third image below with the headline When does the bell ring? It reads, "The pressure at this depth will make it difficult to breathe otherwise." "Pressure?"

Just a cover until October 23rd?

When does the bell ring?

The seventh message, sent on 13 April 2012, included the first image below with the headline How can we stop him?

The eighth message, sent on 19 April 2012, included the second image below with the headline What?

The ninth message, sent on 27 April 2012, included the third image below with the headline It's For Thee. It reads, "A question is like a telephone call. It's best not to answer it until you know who it's from."

How can we stop him?

The tenth message, sent on 9 May 2012, included the first image below with the headline 804.1. It reads, "Books are like libraries – if you see one open you cannot help disappearing inside." Note: In the Dewey Decimal System, the 800 class contains "Literature, Rhetoric & Criticism." The code 804 is listed as "Not assigned or no longer used."

The eleventh message, sent on 29 May 2012, included the second image below with the headline Keep your eyes on the road. It reads, "The reason children sit in the back seat is that they are the only ones who think to look and see if anyone is following them."

The twelfth message, sent on 14 June 2012, included the third image below with the headline Stormy weather. It reads, "There are days when she felt like a lighthouse with no ocean nearby - useless, but flashy nonetheless." 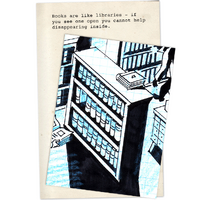 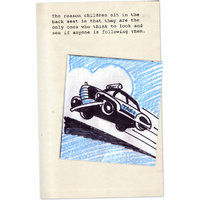 Keep your eyes on the road. 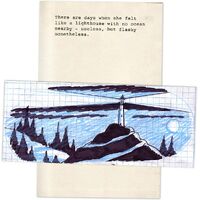 The thirteenth message, sent on 28 June 2012, included the first image below with the headline And a toothbrush. It reads, "Always pack something formal and black when going on a trip. People die on vacation all the time." The luggage tag within the illustration reads, "S.T.M." These initials likely stand for S. Theodora Markson.

The fourteenth message, sent on 24 July 2012, included the second image below with the headline Cave-dwellers, all of us. It reads, "The world is like an octopus – mysterious, damp, and with more arms than seems necessary."

The fifteenth message, sent on 14 August 2012, included the third image below with the headline Qwerty. It reads, "Villainy is like a typewriter – it's old-fashioned, but it still makes permanent marks." 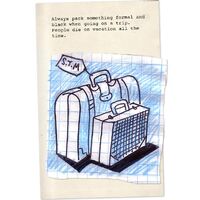 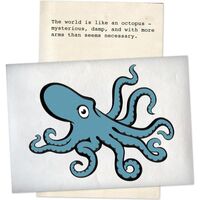 Cave-dwellers, all of us. 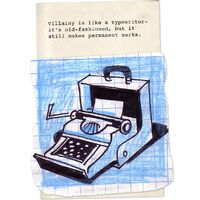 The sixteenth message, sent on 28 August 2012, included the first image below with the headline Third from the left. It reads, "Each of us is a stranger to someone, and to someone else we are even stranger." 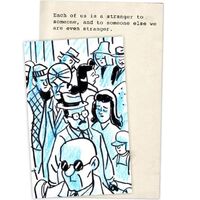 Third from the left

The first batch of the books were released with cover art and illustrations by Seth. The first book was released on October 23 2012, and the second on October 15 2013. A book set inbetween the second and third stories, File Under: 13 Suspicious Incidents, was dropped on April 1 2014 as a reference to April Fools' Day, while the third book dropped on September 30 of the same year, and the final book was published on September 29 2015.

In 2018, an alternate cover of Who Could That Be at This Hour? was released, featuring a more realistic style of illustration, though the inside of the book remained the same. The blurb on the book included a reference to Netflix, which was at the time releasing a series based on A Series of Unfortunate Events, leading some to believe that the new cover release may be predating a prequel adaptation; no such plans have been confirmed, however, and neither have any subsequent books been released with new appearances.

References in A Series of Unfortunate Events

There are multiple references to ATWQ in the A Series of Unfortunate Events TV series, including When Did You See Her Last? (The Bad Beginning: Part Two) and Who Could That Be at This Hour? (The Carnivorous Carnival: Part One). Violet also says to Klaus, "That's the wrong question," in The Reptile Room: Part Two.

At the end of The Carnivorous Carnival: Part One, there is a brief flash of Lemony talking about events that occurred in "Stain'd-by-the-Sea." He said that it had to wait until now to be told, due to respect for the surviving parties and copyright law.

In the episode The End, a "small black statue of a sea monster" was discovered on the beach after a storm by one of the islanders, referring to the Bombinating Beast Statue.

Due to the amount of photographs relating to this article, All the Wrong Questions now has its own gallery.