Allison Williams is an American actress that plays Kit Snicket on Netflix's A Series of Unfortunate Events.

She is probably most known for portraying Peter Pan in the Live! musical televison special in 2014.

Allison Howell Williams, born April 13, 1988, is an American actress, comedian, and singer. She is best known for her role as "Marnie Michaels" on the HBO comedy-drama series, Girls (2012). Williams was born and raised in New Canaan, Connecticut, and is the daughter of former NBC Nightly News anchor and managing editor, Brian Williams, and Jane Gillan Stoddard, a TV producer. She graduated from Yale University in 2010.[1]

Williams stated that she felt strange entering the show in the final season as Kit Snicket, having a lot of "first day of school" anxiety about it. She said that the moment that struck her as most indicative of the character was in "The Slippery Slope: Part One", where she jumps off the cliff; "Kit is clearly working toward a goal large than herself and her own life. Complicated by the fact that it's not just her life that she is in charge of at the moment."

One of the hardest things to shoot for her was on her first day on set, where she had to drive a vintage taxi. She found solidarity with the fact Nathan Fillion, Patrick Warburton and Sara Rue also struggled with it.[2] 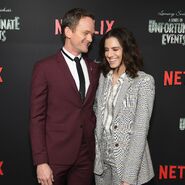 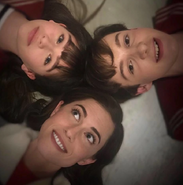 With Malina Weissman and Louis Hynes

With Louis Hynes and Malina Weissman 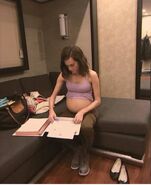 Allison Williams with her fake pregnancy