Sixteen or Seventeen years before The End[1]

Ariel was a colonist on The Island.

Ariel is described as about sixteen or seventeen during the events of The End.[1]

She says that in her life before The Island, she was in prison, where she had disguised herself as a young man for years. She eventually washed up on the island and decided to stay for her own safety.

Ariel's job on the island was to harvest seaweed with Alonso from the ocean. She seems to be very loyal to Ishmael and very keen on living a simple life free of danger.[2]

While storm scavenging, Ariel finds a dagger in a shallow part of the coastal shelf, which she brings to Ishmael. Klaus Baudelaire, a recent castaway, along with his sisters Violet and Sunny, identifies it as an ancient tool used for cutting pages of books. Ariel finds this interesting, but Ishmael believes it useless without books. Ignoring Klaus's protests that a tool like that may be useful, Ariel agrees with Ishmael and throws the page cutter onto the sleigh.

She is among the crowd of islanders who go storm-scavenging the day that Count Olaf and Kit Snicket was up ashore, with Kit on a raft of books. Ariel and the other colonists quickly leave to go fetch Ishmael to decide what to do, leaving Olaf under the watch of Friday Caliban and the Baudelaires. She is presumably still with the crowd when they return, and Ishmael convinces them to abandon Olaf, Kit and the Baudelaires on the coastal shelf.

When the Island has a schism, Ariel is spotted being shouted at by Professor Fletcher. She is on Ishmael's side and argues that the idea of a revolution is dangerous and that she wants to remain safe. She is angry at everyone's secrets, as island life was supposed to be simple.

Count Olaf then arrives and threatens to take over the island. Ishmael, in retaliation, shoots him with a harpoon gun, causing the Medusoid Mycelium under his robe to be released, poisoning the islanders. Ariel cries that the mutineers are to blame for this, as they released Olaf from his cage.

Ishmael suggests the islanders drink cordial to try and dilute the poison, and the fermented cordial drugs them into compliance. He convinces them that the Baudelaires are the root of the trouble, and then gathers them on the outrigger and has them sail off towards Lousy Lane for a cure, though they will not make it in time to save their lives. When the Baudelaires attempt to stop them, as they have the cure with them, Ariel coughs violently and tells the Baudelaires that they can keep the dangerous island, and that they're sailing to safety.

It is unknown if she met her fate by being poisoned by the Medusoid Mycelium. It is noted that the Incredibly Deadly Viper followed the boat with an apple, and as the Baudelaires did not know this, it is possible some islanders survived to report this to Lemony Snicket. Friday knew the snake to be friendly, and thus may have taken the apple from it; however, it is unknown if she would have been able to convince Ariel or the drugged islanders to eat it.

Ariel: I'm Ariel, and I found this in a particularly shallow part of the shelf. I think it's a dagger.
Ishmael: A dagger? You know we don't welcome weapons on the island.
Klaus Baudelaire: I don't think that's a dagger. I believe it's an old tool used for cutting the pages of books. Nowadays most books are sold with their pages already separated, but some years ago each page was attached to the next, so you needed an implement to slice open the folds of paper and read the book.
Ariel: That's interesting.
Ishmael: It depends on how you look at it. I fail to see how it could be of use here. We've never had a single wash ashore. The storms simply tear the pages apart.
Klaus Baudelaire: You never know when a book might turn up. In my opinion, that tool might be useful to keep around.
Ishmael: Well, I'm not going to force you, Ariel, but if I were you, I would toss that silly thing onto the sleigh.
Ariel: I'm sure you're right.
—Chapter Four 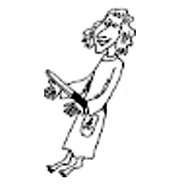 Ariel and her knife in the Russian illustrations.