Lemony Snicket Wiki
Register
Don't have an account?
Sign In
Advertisement
in: Pages with inline Wikipedia links, ATWQ, Association of Associates,
and 6 more

The Association of Associates

To defeat the Inhumane Society and save Stain'd-by-the-Sea.

Shouldn't You Be in School? by Lemony Snicket

The Association of Associates is a small organization of the children of Stain'd-by-the-Sea who gather together in an effort to save the town and defeat the Inhumane Society.

The members that received business cards at Handkerchief Heights in Shouldn't You Be in School?

While these characters were given official profiles in promotional material, they were not an official part of the group in the book series All the Wrong Questions.

While the collection of friends was a sort-of mini-organization in the first two books of All the Wrong Questions, they did not form an official group until Shouldn't You Be in School? After Lemony Snicket informs his friends about VFD, Cleo Knight remarks that it's like their group. They resolve to fight against the Inhumane Society and try to save the town of Stain'd-by-the-Sea.

After the group escapes Wade Academy, they gather at Handkerchief Heights, where Moxie Mallahan provides them all with business cards stating their name and occupation in order to mark them as a member of the Association.[3]

Lemony Snicket leaves the group due to leaving Stain'd-by-the-Sea after the murder of Hangfire. While it is unknown if the members disbanded after this, it can be presumed that they did not remain affiliated with VFD.[4] 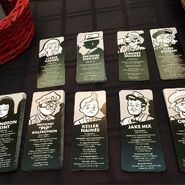 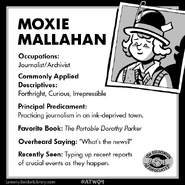 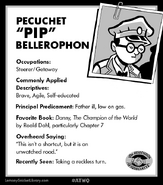 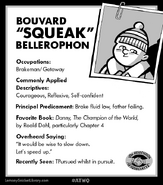 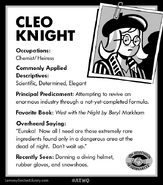 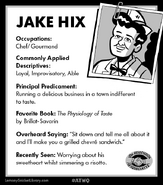 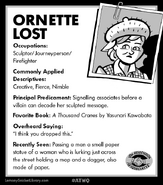 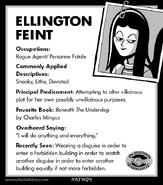 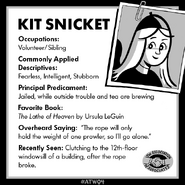 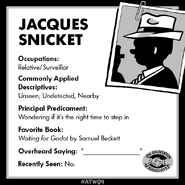 Occupations: Chemist / Heiress
Commonly Applied Descriptives: Scientific, Determined, Elegant
Principal Predicament: Attempting to revive an enormous industry through a not-yet-completed formula.
Favorite Book: West with the Night by Beryl Markham.
Overheard Saying: "Eureka! Now all I need are those extremely rare ingredients found only in a dangerous area at the dead of night. Don't wait up."
Recently Seen: Donning a diving helmet, rubber gloves, and snowshoes.

Occupations: Chef / Gourmand
Commonly Applied Descriptives: Loyal, Improvisatory, Able
Principal Predicament: Running a delicious business in a town indifferent to taste.
Favorite Book: The Physiology of Taste by Brillat-Savarin.
Overheard Saying: "Sit down and tell me all about it and I'll make you a grilled chevré sandwich."
Recently Seen: Worrying about his sweetheart whilst simmering a risotto.

Occupations: Double Agent / Code-maker
Commonly Applied Descriptives: Secretive, Resourceful, Styled
Principal Predicament: Rescuing his sister whilst having a difficult mother.
Favorite Book: Hansel and Gretel by the Brothers Grimm
Overheard Saying: "Psst. You know where, you know when."
Recently Seen: Distracting his mother, the better to meet his associates late at night.

Occupations: Sculptor / Journeyperson / Firefighter
Commonly Applied Descriptives: Creative, Fierce, Nimble
Principal Predicament: Signalling associates before a villain can decode her sculpted message.
Favorite Book: A Thousand Cranes by Yasunari Kawabata
Overheard Saying: "I think you dropped this."
Recently Seen: Passing a man a small paper statue of a woman who is lurking just across the street holding a map and a dagger, also made of paper.

Occupations: Rogue Agent / Personne Fatale
Commonly Applied Descriptives: Sneaky, Lithe, Devoted
Principal Predicament: Attempting to alter villainous plot [sc] for her own possibly unvillainous purposes.
Favorite Book: Beneath the Underdog by Charles Mingus
Overheard Saying: "I will do anything and everything."
Recently Seen: Wearing a disguise in order to enter a forbidden building in order to snatch another disguise in order to enter another building equally if not more forbidden.

Occupations: Volunteer / Sibling
Commonly Applied Descriptives: Fearless, Intelligent, Stubborn
Principal Predicament: Jailed, while outside trouble and tea are brewing
Favorite Book: The Lathe of Heaven by Ursula LeGuin
Overheard Saying: "The rope will only hold the weight of one prowler, so I'll go alone."
Recently Seen: Clutching to the 12th-floor windowsill of a building, after the rope broke.

Occupations: Actress / Kidnap Victim
Commonly Applied Descriptives: Clever, Concealed, Theatrical
Principal Predicament: Getting abducted just when she was about to learn the truth.
Favorite Book: A Narrative of Captivity and Restoration by Mary Rowlandson
Overheard Saying: "Lizzie Haines? An old man like myself has never heard of her."
Recently Seen: Tearing off a fake beard, the better to blindfold a guard she's knocked unconscious. 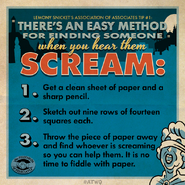 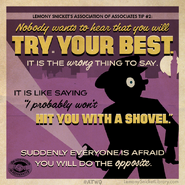 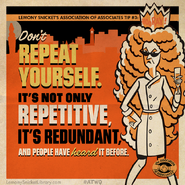 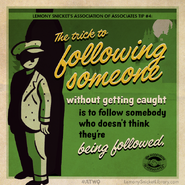 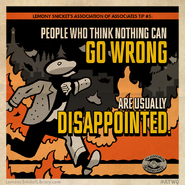