B.J. Harrison is an actress who portrayed Mrs. Bass in the Netflix adaptation of A Series of Unfortunate Events.

BJ Harrison was born in Southern California and won her first art award from the Los Angeles Unified School District at the age of 10. She was college educated in business and data processing before opening an Esthetics business in Beverly Hills, which she operated for twelve years.

During these years, she had the opportunity to work with many clients in and around the film, television and music industry. She also had the opportunity to work on shoots for nail polish campaigns for Max Factor. When not at work, she would always find time for what she is passionate about; painting, and exhibiting her art. She became known locally for her paintings, as well as her “wearable” art.

BJ spent several years between Vancouver and Los Angeles. After she and her husband, Brian, settled permanently in Vancouver with their young daughters, art took a back seat for a few years as she made raising the daughters her priority. BJ started creating wearable art again, as she could do this while raising her children. Before long, a community of families — especially the kids — were wearing art by BJ.

Then, ‘Hollywood North’ crossed her path. A local casting agent who had noticed BJ over a period of time asked if she had ever considered acting. Having been around the industry but not really ‘in it’ while living in Los Angeles, she decided to give a try. The rest is history! BJ now has extensive credits to her name in film, television, voice- over, and in U.S and Canadian national commercials.

Although she finds great joy in acting, BJ now has more time to indulge in her absolute passion, painting! Her influences come from many sources, including artists Norman Greenwald, Ernie Barnes and Frank Lee Miller. Her current work — acrylic and mixed media on panel — is inspired by nature, especially the beautiful coast of British Columbia. The panels are built by her husband, Brian, at Boffo Creations.

BJ’s work is sold privately in Canada and internationally.[1] 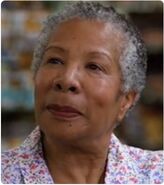 Retrieved from "https://snicket.fandom.com/wiki/BJ_Harrison?oldid=75266"
Community content is available under CC-BY-SA unless otherwise noted.