The orphaning of Violet, Klaus, and Sunny Baudelaire

The precise cause of the fire has never been established and no one was ever charged for setting it. The mystery of what or who started the fire has been a large debate in the series fandom for a long time. One must also remember that there are three conflicting documentations of the fire (The book series, the Paramount film and Netflix adaptation) so the circumstances that led to how it began may differ in all of them.

One major and popular theory behind the fire is that Count Olaf is the culprit. He has had a history of starting similar fires and admits to being guilty of "arson". His possible motives include getting the Baudelaire fortune and taking revenge on Beatrice and Bertrand Baudelaire for murdering his own parents a few years earlier. However, in The End, Count Olaf seemed to deny his involvement; when Klaus accused him of starting the fire, he only answered, "Is that what you think?" after a long pause, and then after Sunny says, "We know it," he responds, "You don't know anything." Olaf had a tendency to brag about his crimes yet he did not boast about the fire, which means that he may not be lying about his claim but at the same time, covering up his tracks was his specialty given his profession as an actor.[2]However, it is never confirmed nor denied either by Olaf, so he may not have been involved.

Another possibility is that the arsonists were the Man With a Beard But No Hair and the Woman with Hair but No Beard, however it is unknown why their motives would be to setting the fire, other than making the children orphans. Another person could be Esmé Squalor. A motive for Esmé to set the fire is to get ahold of the Baudelaire fortune(In The Slippery Slope, it is revealed that Esmé got ahold of the Quagmire Fortune). It is also possible that a member Olaf's troupe started the fire. Or another theory is that an unknown member of the fire-starting side of V.F.D. is responsible.

There is also a theory that the fire-fighting side may have set the fire in an attempt to orphan the Baudelaires and recruit them. While this may seem far-fetched and evil, it should be noted that V.F.D recruits new volunteers by kidnapping,[3] and it is noted that the Denouement triplets were recruited without their parents' knowledge, and that their house suspiciously burnt down after the boys were taken.[4]

Last not but least, in the best-case scenario, the fire possibly occurred by accident as opposed to an arson, as the Baudelaires are shown to have extremely bad luck. This may be the cause in the book canon only, as the movie and TV series canons imply arson. It could have been caused by one of Violet's inventions malfunctioning. For example, Violet mentioned in the The Bad Beginning (book canon only) that she is inept at cooking and sometimes burns toast.[5]

Arthur Poe claims that the fire killed both the Baudelaire parents (Bertrand and Beatrice), although no mention has been made that their bodies were ever found, leaving Violet, Klaus, and Sunny to later suspect one of them may be alive.

The three children were not home at the time and thus, they unknowingly escaped the fire. They were encouraged by their parents to go to Briny Beach that day. This indicates that if they were aware that the fire would happen, they were unable - or chose not - to save themselves despite the fact the mansion had a secret passageway to 667 Dark Avenue.[6][7]

Page 13 of the Snicket File states that "Due to the evidence on page 9, experts now suspect that there may, in fact, be one survivor of the fire, however the survivor's whereabouts are unknown". However, it was not stated which fire the page was referring to. The Baudelaire children initially assumed that Page 13 cited the fire that burned down their mansion because the page also had a photo of their parents and had been filed under the name, "Baudelaire".[8] Quigley Quagmire, however, assumed that the sentence was referring to his survival of the fire that destroyed his own home and killed his parents.[9] Neither theory was ever confirmed, and it was never revealed if one of the Baudelaire parents ever survived. It is most likely that they definitely have perished in that very fire.

It is unclear if Kit Snicket was aware of the Snicket File, but she believed the Baudelaire parents to be dead since she referred to their children "losing their parents."

The Bad Beginning: Rare Edition revealed a reference to a survivor of a fire hiding within the City's Fountain of Victorious Finance, but it does not confirm the individual's identity, as well as this, in Lemony Snicket: The Unauthorized Autobiography, it is revealed that a certain survivor was hidden on the set of Zombies in the Snow, waiting for the Baudelaire orphans to arrive. However, they had to leave after they realized that Monty Montgomery did not receive the message.[3]

One major fan theory is that Beatrice survived the fire, but died later in a separate inferno at the masked ball held by the Duchess of Winnipeg. This theory builds on the mentions of a survivor in The Bad Beginning: Rare Edition and Lemony Snicket: The Unauthorized Autobiography, as well as the fact Beatrice, as a former volunteer, would have known about the passageway from her home to 667 Dark Avenue.

It is also said that Lemony Snicket tried to contact Beatrice in order to deliver a message about Olaf at the masked ball, and he says he had been attempting to do so for fifteen years.[10] If Lemony and Beatrice split up soon before she arrived on The Island with Bertrand and found herself pregnant with Violet, that would leave about fifteen years in between the breakup and all that had transpired in A Series of Unfortunate Events.

The Duchess claimed that following her masked ball, in which Lemony was captured, her mansion was indeed burnt down. She also mentioned that Beatrice had left behind some of her belongings there.[3]

Beatrice's survival theory is further explored when speculation came about that she may have escaped the fire at the masked ball as well and ended up at Heimlich Hospital, taking on the alias of Carrie E. Abelabudite, an anagram of her own name "Beatrice Baudelaire" as shown on the patient list Klaus and Sunny examined to try and spot Violet's name. This could imply that Beatrice eventually perished in the Heimlich Hospital Fire.[8]

The evidence backing this theory would mean that Beatrice escaped the fire at her mansion, attempted to reunite with her children, but sadly perished in the Duchess's burning mansion before her survival could be known. This theory, though popular and well-researched, has never ultimately been confirmed. This theory is non-canon in the TV Series since in that timeline, the masked ball had occurred before the Baudelaire children were born.[11]

In the 2004 Paramount film, Lemony had stated that the fire "was started from a great distance through the refraction and convergence of light." While Klaus infiltrated Count Olaf's tower to sabotage The Marvelous Marriage, he and Sunny discover a large eye-shaped magnifying glass that was aimed at the remains of the mansion; Klaus mutters to himself, "These things don't just happen" and concludes that Olaf must have been the arsonist. As the film ends shortly after Violet was rescued and Olaf put to justice at last, this was never confirmed.[12]

In the TV series, while Lemony Snicket is narrating inside the Baudelaire mansion, a thin beam of light was being shone in from the outside, igniting the whole mansion on fire, implying it is arson in the TV series canon.

A fashionable person speculated to be Esmé Squalor is seen setting the Quagmire Mansion on fire. Esmé held a grudge against Beatrice, saying, "I want to steal from you the way Beatrice stole from me." This has led fans to theorize that Esmé is responsible, but that was seemingly debunked when later in the series when, firstly, Esmé claims to Olaf that she did not start the fire,[13], and secondly, Gustav Sebald was showing disguises and one of them was the same outfit worn by who burned down the Quagmire Mansion, labelled the "arsonist disguise."[11] 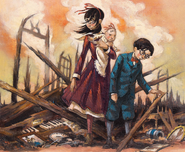