Dark and Scaly; covered in seaweed(Netflix)

You may be looking for Bombinating Beast Statue.

The Bombinating Beast is a mysterious sea creature and a major element in the All the Wrong Questions series.

It is also suggested that it is The Great Unknown mentioned a few times in the A Series of Unfortunate Events books. This is further implied in the TV series, where it is confirmed that the entity in question is a sea monster since the viewer can see an eye, scales, and it makes a bombinating sound. Both the Bombinating Beast and the Great Unknown are large entities that roam the sea and have a body in the shape of an ominous question mark.

Mimi Mitchum: Young people shouldn't be out at this hour. The Bombinating Beast might get you.
Lemony Snicket: That's a myth.
Harvey Mitchum: Ignore the bell and you'll find out.
—Who Could That Be at This Hour?

The original Bombinating Beast was a mythological sea monster that lurked in the waters outside the town of Stain'd-by-the-Sea. It was known to eat humans, and made a terrifying bombinating (buzzing) sound while hunting. It was believed to be half-horse, half-shark, though some legends claim half-alligator and half-bear.

Allegedly, the Bombinating Beast could be tamed by imitating its buzz. One myth professed a wizard held the beast under his power so long as it was kept fed.

Stain'd-by-the-Sea's bell tradition began with a ringing of a gong in the town square that was used to warn the beast away on moonless nights.

The original beast was apparently slain by Lady Mallahan. While some presume this is simply a legend, Mallahan's descendants owned a statue that could control the beast, so it's likely that the original monster was indeed killed by the voyager.[2]

Postmortem, the beast became a mascot for both the Mallahan Family's newspaper, The Stain'd Lighthouse, as well as the town, and it decorated several areas of city, including the Colophon Clinic[3] and Mallahan Lighthouse.[2] While not explicitly stated, images of the Bombinating Beast can in seen the original illustrations of All the Wrong Questions to be decorating Stain'd-by-the-Sea's Library,[2][3] the Bellerophon Taxi,[2] the town's streets,[3] the Mann Mansion,[4] the buildings surrounding the Roe House and the hallways of Wade Academy.[5]

Though the beast was considered dead, in the town of Stain'd-by-the-Sea, women would warn their children and husbands that the beast would eat them if they did not finish their vegetables, and locals would still dress as the beast on Halloween and Purim. Supposedly sailors still saw the Bombinating Beast swimming with its body curled up like an underwater question mark.

The beast is described as looking like a sea horse, though Lemony Snicket says it "looked like a sea horse like a hawk looks like a chicken," with thin and fierce eyes, and rows of tiny, sharp teeth.[2]

Recreation of the Beast

After the draining of the sea, Armstrong Feint became fascinated with the Bombinating Beast and recreating it.[6] While his process for recreating the monster is unknown, it somewhat involved the process by which caviar is made, perhaps the special tanks used for the fish.[5][6]

While he managed to create hybrid specimens, Armstrong was not able to control them without the statue, which he failed to purchase from the Mallahans due to a miscommunication.[2] He and his society, the Inhumane Society, moved into Stain'd-by-the-Sea and tried multiple times to steal it.

The young beasts began as tadpole-like creatures, raised for a while in an abandoned aquarium,[3] inside tanks that had been used by the Roe House. It is unknown how many were created and how many survived, but only one was noted to have reached adulthood, as only one was kept in the fire pond at Wade Academy,[5] and later summoned by Lemony Snicket with the statue. Snicket fed Armstrong to the creature, and then wandered into the Clusterous Forest with the statue. It is unknown what he did with the statue and what happened to that beast, or its siblings, after this.[6]

The creature is described as having shiny, scaly, black skin, "as wet as blood but as dry as the grave." It has several rows of sharp teeth, with a slimy mouth and fiery bright eyes covered in several sets of scaled lids, like the blades of a machine; the eyes are dark and wet and "blink every which way." It has a tail and claws and a forked tongue. It also roars- a "deafening and reckless" roar- as well as buzzes.[6]

Fiona: What was that, Stepfather? Why did he leave?
Violet Baudelaire: What was that third shape?
Captain Widdershins: Something very bad. Even worse than Olaf, probably. I told you Baudelaires that there is evil you cannot imagine.
—The Grim Grotto

The Great Unknown is a mysterious question mark-shaped object that roams about the sea off the coast of The City. One of Kit Snicket's brothers, either Lemony or Jacques, first referred to it as "the Great Unknown". The books never clarify whether this object is natural or man-made.

The Great Unknown slithers about like a snake. It appears to look like a "shadow as chilling as Count Olaf's glare and as dark as villainy itself."[1] It is larger than the Carmelita and the Queequeg, (Though in the Netflix series it is shown to be much, much larger than would be implied by that sentence). The nature or intentions of the Great Unknown are unknown. Captain Widdershins said that the question mark "was something even worse than Olaf himself," and Snicket describes it as emanating an aura of menace. Even Olaf fears the object.

However, when the Queequeg was destroyed after being struck by the falling remains of the Quagmires' flying home, Captain Widdershins, Fiona, Fernald, Hector and the triplets decided to take their chances with it. Only Kit chose not to be drawn into the Great Unknown and escaped on a pile of books, and the Great Unknown did not pursue her.

In Lemony Snicket: The Unauthorized Autobiography, p. 150, there is a map which contains a weird creature. It may be The Great Unknown for two reasons: Firstly, the Baudelaires see the Great Unknown in The Grim Grotto near Briny Beach, and the creature is near it on the map. Secondly, the creature is like a weird sea creature, and it could be a sea creature. However, Count Olaf refers to the object having "sonar" on which the Carmelita could appear and refers to it in the plural or gender-neutral term "their".[1] Although Kit is familiar with it, she denies knowing its true nature to the Baudelaires.

With the inclusion of the Bombinating Beast in All the Wrong Questions, as well as this quote:

It is a popular speculation that the Great Unknown and Bombinating Beast are the same creature. While Lemony did not name the creature in A Series of Unfortunate Events, it is possible that he is still in control of it and wants to keep its powers secret, or ashamed of his past with it. It is also unknown whether the Great Unknown, if it is the Beast, is the original Bombinating Beast or the recreation made by Armstrong Feint; if it is the recreation made by Feint then it is actually a hybrid species and an invasive species, presumably being released into an environment not meant for it.

It should be noted that the Great Unknown and Bombinating Beast are explicitly the same in the Netflix adaptation, though whether that means it is canon in the book series is unclear.[7]

There is a theory that the Great Unknown is not simply a physical object/being, but is Lemony Snicket's metaphor for either death, the concept of mystery, or both. Specifically, it could refer to the concept of unsalvageable, unobtainable and eternal mysteries that will never be figured out. Death could be thought of as such a mystery; an example is if there is an afterlife. In The End, Lemony Snicket begins using "the great unknown" when death or mystery appears:

Assuming it is not symbolism, the Great Unknown takes the series's nihilistic tone a step further by verging into the point of Cosmic Horror, at least in the Netflix series.

As stated above, the Great Unknown and Bombinating Beast are the same in the Netflix series; Fiona says that Lemony wrote an account of it, and that it has had different names over the years.[7]

There may also be two Bombinating Beasts in The Netflix series. Originally seen by Fiona, the Baudelaires duck behind a table and can see it out of the port hole. However, they soon look behind themselves and see it in the port hole behind then. Either it has circled the Queequeg instantly or there is more than one.

The statue of the Beast ends up washing ashore on The Island, found by Alonso on the same day the Baudelaire orphans arrive.[8]

All the Wrong Questions Illustrations 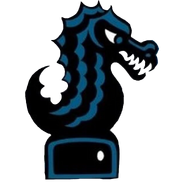 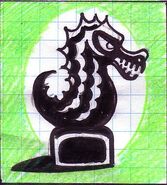 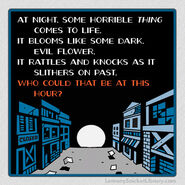 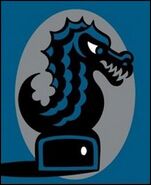 Hidden in the Fire Pond. 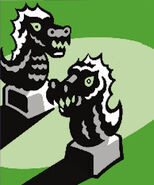 The beast attacks the train.

Statue given to contest winners.

Hidden in the Background

On the lamp and the wall clock.

Wrapped around the neck of the bust (far right).

On the taxi dashboard (slightly cut off, far left).

Atop the clock, to the right of Lemony Snicket.

Atop the lamp, to the right of Lemony Snicket.

On the Knight's shield and in the painting on the ground beside it (bottom right corner).

Underneath the Department of Education sign, and atop the building on the far right, behind Hangfire.

On the far right wall, and decorated into the railing in the bottom right.

A Series of Unfortunate Events Illustrations

In "Lemony Snicket: The Unauthorized Autobiography." 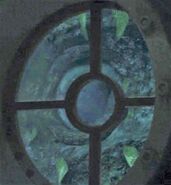 The Great Unknown in The Grim Grotto: Part One.

The statue of the Beast in The End