To organize headquarters for VFD.

"The World is Quiet Here."

Lemony Snicket: The Unauthorized Autobiography
The Building Committee is a segment of VFD that appears to dictate locations.

Note: All information comes from the Transcript, which takes place sometime after Geraldine Julienne created her column, and when one of the Js is (presumably) old enough to drink brandy. The rest of the specific time period is unknown.[1]

Note: Very few clues were given to the identity of the members of this meeting. Only the initials were given, so names following are speculation, though some of it has backing.

Other People Mentioned in the Transcript

The transcript was recorded sometime in April. The Code of VFD dictates that the minutes not be read by anyone who did not attend the meeting. The first half was hidden with accompanying photographs and a report on a possible neophyte.

M calls the meeting to order, and R does a rollcall. They begin by reciting the pledge- "the world is quiet here"- and then M makes announcements:

At this, the other M brings up the urgent matter that they will again have to move headquarters, which upsets the other members. M informs them that their spies at The Daily Punctilio have informed them that Geraldine Julienne will be publishing their address in her "Secret Organizations You Should Know About" column.

Duchess R, incredulous, reminds them of the chaos of their recruitment tactics- kidnapping children and scattering them across the globe until people have stopped looking for them and their ankles have healed, and then bringing them to headquarters to teach. She insists that continuing to repeatedly move headquarters will confuse neophytes more- for example, tomorrow morning, the neophytes tested may be tired from helping them move materials to another headquarters, and as they know from S's report on Prufrock Preparatory School, young people who do not get enough sleep are likely to suffer and forget important things, such as the sugar bowl secret.

M reminds her that they cannot afford to be discovered, though members are confused as to how they keep being found, as they've stopped inscribing the V.F.D. Eye onto buildings and stopped using green wood. Jacques Snicket proposes that an enemy has infiltrated their ranks, but Kit Snicket disagrees with him. R and R fight over which is right until M breaks them up, and Jacques reminds them that since he had joined VFD, they have had to flee seven headquarters, and they could have lost untold amounts of information.

As he suggests they have been betrayed, Esmé Squalor and Count Olaf arrive from behind the puppet theater. Olaf pulls a match[4] out of a box and makes several demands.

The second half of the transcript was hidden between pages 302 and 303 of Ivan Lachrymose: Lake Explorer and hidden under someone's bed. 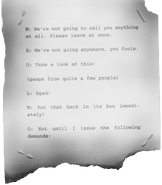