Byam was a colonist of The Island.

Byam is noted as to having lived a simple life as a sailor for several years, which bored him immensely, and he longed for a complicated life. He eventually was shipwrecked on The Island; it is unknown when nor why he chose to stay. He is mentioned as having a mustache long enough to twirl, and that is "unusually curly."

His job on the island was to ferment coconuts with Willa in order to make it into cordial. Unbeknownst to him, fermenting the coconut milk caused it to become an opiate, drugging the islanders into compliance if they drank too much of it.[1]

While storm-scavenging the day that Violet, Klaus and Sunny Baudelaire wash ashore, Byam finds and discards some batteries at Ishmael's suggestion. (However, it is possible that these are the batteries that are later snuck to Finn for her flashlight.)

Byam is likely among the crowd of islanders who go storm-scavenging the day that Count Olaf and Kit Snicket wash up ashore, with Kit on a raft of books. The colonists leave to go fetch Ishmael to decide what to do, leaving Olaf under the watch of Friday Caliban and the Baudelaires. He is presumably still with the crowd when they return, and Ishmael convinces them to abandon Olaf, Kit and the Baudelaires on the coastal shelf.

When the island has a mutiny over breakfast, Byam is seen twirling his mustache at Ferdinand. He disagrees with Ariel that the secrets on the island will worsen life, as his life before had been so boring that he believes a complicated life would be alright, which confuses and astonishes Friday.

Ishmael shoots Olaf with a harpoon gun, which causes the Medusoid Mycelium to be released, poisoning the islanders. Ishmael suggests the islanders drink cordial to try and dilute the poison, and the fermented cordial drugs them into compliance. He convinces them that the Baudelaires are the root of the trouble, and then gathers them on the outrigger and has them sail off towards Lousy Lane for a cure, though they will not make it in time to save their lives.

It is unknown if he met his fate by being poisoned by the Medusoid Mycelium. It is noted that the Incredibly Deadly Viper followed the boat with an apple, and as the Baudelaires did not know this, it is possible some islanders survived to report this to Lemony Snicket. Friday knew the snake to be friendly, and thus may have taken the apple from it; however, it is unknown if she would have been able to convince Byam or the drugged islanders to eat it. 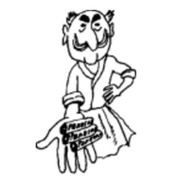 Byam with batteries in the Russian illustrations.