Ishmael: Call me Ish.
Calypso: I'm calling you a bad facilitator!
—The End

Calypso was an islander in The End.

How and when Calypso came to the Island and why they chose to stay is unknown. They seem to be loyal to Ishmael.

Calypso and Brewster work as reapers of the wild grass, which serve as the colony's only spice.[1]

While storm-scavenging the day that Violet, Klaus and Sunny Baudelaire wash ashore, Calypso finds a door and brings it to Ishmael; he hints to them that the door could not be attached to any of the island's tents, so they discard it into the pile of things for the sheep to take to the arboretum.

Calypso is among the crowd of islanders who go storm-scavenging the day that Count Olaf and Kit Snicket wash up ashore, with Kit on a raft of books. Calypso agrees with Omeros that they need to fetch Ishmael to decide what to do with the new visitors, but after failing to push Kit's raft along the coastal shelf, the group leave to bring Ishmael on a sleigh, leaving Olaf under the watch of Friday Caliban and the Baudelaires. They are likely still in the crowd when they return and Ishmael suggests that the Baudelaires, Olaf, and Kit Snicket be banished, and they abandon them on the coastal shelf.

When the schism breaks out on Decision Day, Ms. Marlow is seen stomping her feet at Calypso. When Ishmael arrives, Calypso calls him a bad facilitator; however, they also suggest the mutineers be abandoned for bringing the secrets of the island to the light.

Ishmael shoots Olaf with a harpoon gun, which causes the Medusoid Mycelium to be released, poisoning the islanders. Ishmael suggests the islanders drink cordial to try and dilute the poison, which Calypso finds reasonable. However, the fermented cordial drugs the colonists into compliance. Ishmael convinces them that the Baudelaires are the root of the trouble, and then gathers them on the outrigger and has them sail off towards Lousy Lane for a cure, though they will not make it in time to save their lives.

It is unknown if they met their fate by being poisoned by the Medusoid Mycelium. It is noted that the Incredibly Deadly Viper followed the boat with an apple, and as the Baudelaires did not know this, it is possible some islanders survived to report this to Lemony Snicket. Friday knew the snake to be friendly, and thus may have taken the apple from it; however, it is unknown if she would have been able to convince Calypso or the drugged islanders to eat it.

Ishmael: there's nothing wrong with cordiality. I suggest we all spend a few minutes discussing our situation in a cordial manner. We can decide what the root of the problem is, and come up with a solution at our leisure.
Calypso: That does sound reasonable.
—Chapter Twelve 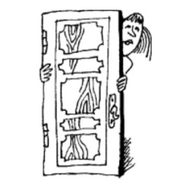 Calypso with a door in the Russian illustrations.