Captain Julio Sham is a V.F.D. disguise used by Count Olaf in The Wide Window, the third book in A Series of Unfortunate Events.

With the disguise, he was able to woo Aunt Josephine at a local grocery store in the town of Lake Lachrymose when Violet, Klaus, and Sunny were staying with her at her home. Josephine was especially convinced because he had a business card that said "Captain Sham" and not "Count Olaf", and Lemony Snicket points out that literally anyone can go to a printing store and have anything they want printed. He later told Aunt Josephine by phone that he was really Count Olaf, and that she had to write out a will leaving him the children and promptly disappear.

He was able to utilize an eyepatch to hide his eyebrow and a hinged peg leg to hide his tattoo. Olaf was aided by the Henchperson of Indeterminate Gender who guarded Captain Sham's Sailboat Rentals while posing as a security guard.

Count Olaf was later uncovered when Sunny used her four sharp teeth to bite open his peg leg in front of Arthur Poe, who pursued Olaf but failed to capture him.

The disguise could later have been used by Jacques Snicket when he captains the Prospero, though this is never confirmed.

In the 2004 film, Captain Sham's role is much the same as in the book, until after the death of Josephine. Here, Olaf discards his disguise ahead of time, and pretends to 'rescue' the children from the Lachrymose Leeches, and the children are returned to his custody. Soon afterward, he stages The Marvelous Marriage.

As in the book, Captain Sham bumps into the children and Aunt Josephine at the market, complimenting her and telling her that his leg was eaten by leeches, making her fall for him. He then forces her to write a suicide note which also instructs her to hand the children to him, and he also orders her to kill herself. The children, Mr. Poe, and he go to lunch at the Anxious Clown, where the children eat peppermints and suffer allergic reactions.

They go to Aunt Josephine’s house, where Klaus discovers from the note she is hiding in Curdled Cave. The house then falls into the sea. Mr. Poe and Sham start the adoption process and the children steal one of his boats to find Aunt Josephine. He saves them from the Lachrymose leeches but then pushes Aunt Josephine to the leeches. Back at the bay, Sunny bites off his peg leg to reveal he is Count Olaf, but he and his troupe escape.

He has gray hair and has a captain's hat. He wears an eyepatch to cover his eyebrow. He wears a brown jumper and a navy blue captain's coat, and blue shorts with a wooden peg leg to cover his tattoo. He smokes a pipe and speaks in a Scottish accent. 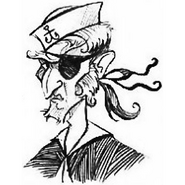 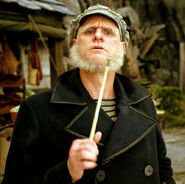 Captain Sham as depicted in the 2004 film.

Captain Sham as depicted in the 2004 film.

Captain Sham as portrayed in the Netflix series. 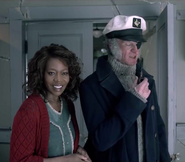 Josephine brings Sham to her house.

Captain Sham on his boat.