Chabo the Wolf Baby was a disguise used by Sunny Baudelaire when she and her siblings snuck into Caligari Carnival during The Carnivorous Carnival.

Chabo, along with Beverly and Elliot (Violet and Klaus' disguise) lived in the Freaks Caravan with the other Carnival Freaks. Violet made up a story behind the "wolf baby" - there was a female hunter who fell in love with a handsome wolf, and Chabo is their child.

Chabo is very feral, and gave Beverly and Elliot several scars for teasing her; they later befriended her, and she prefers to stick with them. She is also a skilled chef.

How the Disguise was Made

The Baudelaires found the beard part of Count Olaf's Stephano disguise and it covered Sunny up entirely to make her look like a furry creature.

Sunny wears a rag that they find and mess her hair up. She also puts some dirt on her face. 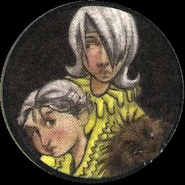 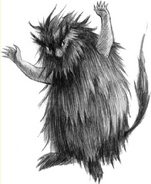 Chabo the Wolf Baby in the TV series.

At the Lion Show. 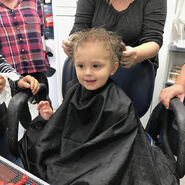 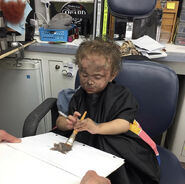 Presley Smith applying her own makeup. 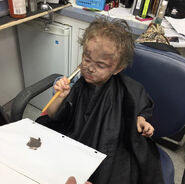 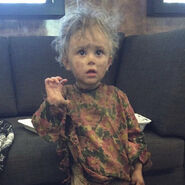 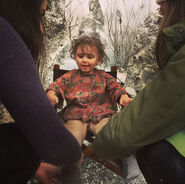