Coach Genghis is Count Olaf's disguise in The Austere Academy.

He is a "renowned" gym teacher working at Prufrock Preparatory School who wears a turban to cover his one eyebrow and expensive looking running shoes to cover his tattoo of an eye on his ankle. In the TV series, he speaks with a southern accent.

He is reluctant to remove his turban for "religious reasons". Vice Principal Nero says he won't ask Genghis to violate his religious beliefs, thinking it's more important than proving Genghis isn't a killer, and claims to do so is religious persecution. When asked what religion this is, the Hook-Handed Man says Reconstructionist Judaism and Olaf replies, "...Yes, that."

Genghis claims he shouldn't remove his shoes because he has been running all day and his feet smell.

As Coach Genghis, Count Olaf persuades Vice Principal Nero to let him put Violet Baudelaire and Klaus Baudelaire through his S.O.R.E. exams. When Vice Principal Nero gleefully expels the Baudelaire children for "cheating" during the S.O.R.E. exams, Sunny Baudelaire lunged towards Coach Genghis and removed his turban exposing his true identity. Count Olaf gets away where the White-Faced Women disguised as lunch ladies managed to abduct Duncan Quagmire and Isadora Quagmire.

In the TV series, he appears to introduce himself to everyone during a pep rally. He then gets the Baudelaires to run laps every night to make them tired so that they fail their exams. One night, the Quagmires help the Baudelaires and pretend to be them so that they can study. Olaf finds out and during their exam, he challenges them to an arm wrestle, claiming if they lose, they flunk and he will adopt him. Sunny unties his laces and when the Baudelaires push his hand down, his shoe goes flying into the air, revealing his tattoo. However, the white faced women have put the Quagmires into the car and when Violet pulls his turban, it shows he is really Count Olaf. He drives away with the Quagmires.

Coach Genghis wears a red Prufrock Zip-Up jacket and red running trousers. He wears white trainers to cover his tattoo and a white turban for ‘religious reasons’. He also has a red brooch from Carmelita on his turban. He speaks in a southern accent.

"We put a lot of thought into Coach Genghis so that we didn't feel we were disrespecting anybody. I happened to be listening to a podcast called S Town and the protagonist, John B. McLemore sounded exactly how I imagined a small-town, inferiority-complex-ridden gym coach would sound." - Neil Patrick Harris on Coach Genghis. 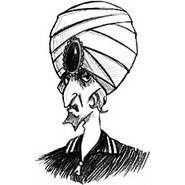 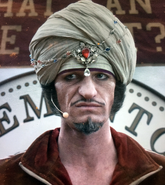 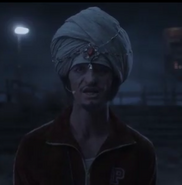 Coach Genghis on the field at night. 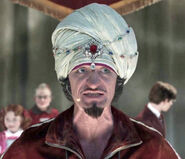 Coach Genghis before the arm wrestle.