After Colonel Colophon was badly burnt in an explosion, Colophon Clinic was built to treat him. Dr. Flammarion worked at the clinic, possibly before he was involved in the Inhumane Society. After Stain'd-by-the-Sea's economy crashed and the town started to empty, Colonel Colophon became the only patient at the clinic. He was murdered by Hangfire via defenestration, so that Hangfire could pose as him if need be and use the clinic as a headquarters.

The clinic was staffed by the Inhumane Society, and chains and shackles were added to the beds in preparation to hold kidnapped children, and the back room was made into a makeshift aquarium for their tadpoles. When Cleo Knight attempted to run away, Dr. Flammarion kidnapped her and held her in the cellar of the clinic, where she was forced to continue her experiments to find invisible ink, so that the Inhumane Society could steal her formula.

When Lemony Snicket figures out where Cleo is being held, he and his associates go to the clinic. While Moxie Mallahan distracts Nurse Dander, Snicket sneaks around to try and find her. He finds who he at first believes to be Colonel Colophon in the tower, until he sees the glass of wine; as Colophon abstained from alcohol, this clues Snicket in that he is talking to Hangfire. Hangfire attempts to throw him from the window, but when Jake Hix crashes through the wall and Snicket escapes, the villain instead uses the bandages he had as a disguise to climb from the window and run away.

Snicket and Jake open the cellar hatch for Cleo, and they bring Dr. Flammarion and Nurse Dander to the police.[1] After this, the Inhumane Society abandons the Clinic as a hideout.[2]

The clinic is made of black stone, with small, narrow windows. The stairs to the front door were broken and covered in black moss. There is a tall and thin tower stuck to the top, with sharp-looking shingles as a roof. There are flowers and bushes decorating the yard, though they look sinister. A dark fence surrounds the clinic's outside, with a tall gate, and the doors are heavy and made of glass.

The foyer of the clinic is a tall and dark room, with expensive sofas and gloomy paintings ddecorating the walls. The receptionist's desk is in the middle of the room.

A winding staircase leads to the tower, where Colonel Colophon used to stay. There is a large window, and a fireplace.

There is a swimming pool, which is decorated with a bench shaped like the Bombinating Beast.[1] 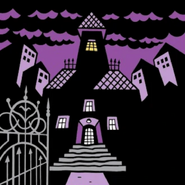