Netflix Adaptation: The Bad Beginning: Part Two (pictured), The Penultimate Peril: Part Two
Count Olaf's Family is a mysterious part of Count Olaf's past in A Series of Unfortunate Events.

It is presumed that Count Olaf's title is legitimate, and thus either his father or mother (or both) are of noble birth. This is assumed due to the fact that Olaf seemed to be a student at Wade Academy, mainly attended by royal children.[2]

Count Olaf's mother and father were killed at an opera performance of La Forza del Destino by Beatrice and Bertrand Baudelaire, with assistance from Kit Snicket,[3] who was in a relationship with Olaf at some point in her life.

Olaf survived for some time afterward, until dying on The Island from a harpoon gun wound.[4]

As Kit Snicket's only confirmed relationship was with Olaf, it is often theorized that her daughter, Beatrice Baudelaire II, is biologically Olaf's. While it is unknown when their breakup happened, the events of A Series of Unfortunate Events seem to take place under nine months, giving enough time for them to have had a physical relationship before he gained custody of Violet, Klaus, and Sunny Baudelaire.

As Olaf's final words are quoting "This Be The Verse," a poem about parents inevitably messing up their children, and he abused and tortured the Baudelaires in an effort to get revenge against their parents, it makes it much more thematic that the Baudelaire children adopt his biological child and plan to raise her with love and kindness and not continue the cycle of abuse.[4]

In the Netflix series, Beatrice II is not Olaf's child and is known to be biologically the daughter of Dewey Denouement.[5]

Olaf is known to be either the third cousin four times removed of the Baudelaire Family or the fourth cousin three times removed. It is unknown whether this is through Beatrice's family, Bertrand's biological family, or Bertrand's adoptive family. 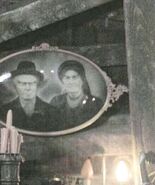