Marguerite: I'm back, Dagmar ... I have a friend with me! I'm going to make him a poached egg!
Dagmar: Do whatever you want.
—File Under: 13 Suspicious Incidents, "Inside Job"

Dagmar is a woman who lives in Stain'd-by-the-Sea, and appears in File Under: 13 Suspicious Incidents in the first incident, "Inside Job."

Dagmar is hired by Marguerite Gracq's father to watch over Marguerite while he left town to find a better place to live. Dagmar moved into the family home during this time, beside the Gracq Mine, Stain'd-by-the-Sea's local supply of gold. Just a few minutes after her arrival, Marguerite's mother's painting of Henry Parland fell from the wall. While re-hanging it, Dagmar noticed the black paint on the nail had chipped off, revealing that the nails were made of gold- the Gracq gold had been hidden in plain sight.

Deciding to steal the gold for herself, nail by nail, Dagmar would wait until Marguerite was in working the mine and remove a painting from the wall and steal the nails. Marguerite would re-hang the painting with more nails from the workshop, not knowing of their properties, though she became suspicious of how the paintings started falling after Dagmar's arrival, and too neatly to be by accident.

Possibly due to her intention to steal the gold, but also possibly because she seems to be an unpleasant person, she doesn't do a very good job of watching Marguerite, as she was hired to do. She instead opts to spend most of her time playing polka music on the radio in her room.

Still suspicious, Marguerite brings Lemony Snicket to investigate, calling to Dagmar that she has a friend over, though Dagmar doesn't care. Later, once Snicket figures out what Dagmar has been up to, he goes upstairs, tells her to turn off her polka music, and then demands she hands back the gold before he calls the police.

Dagmar was indeed arrested, and Snicket triumphantly notes that in prison, there is no polka music. 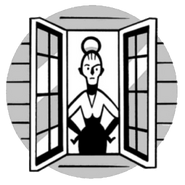 Dagmar can be seen inside the cottage window.