Damocles Dock is a dock located on the coast of Lake Lachrymose. It is typically where visitors are dropped off after traveling by the Fickle Ferry, in addition to being greeted by several signs, warning them to avoid the lake if they have food with them, or have eaten a short time ago.

Damocles Dock is the resting place for the Fickle Ferry, a ferry that drives all across Lake Lachrymose. It is described as a "small square," with lights that shine out to sea in order to remain visible. It is directly across from the Curdled Cave.

Captain Sham’s Sailboat Rentals operated off of there for some time.[1]

When the Baudelaire children were dropped off at the dock, Duchess R took a photo of them for a V.F.D. investigation that ended up in the possession of Madame Lulu.[2]

Baudelaire orphans at Damocles Dock in the film 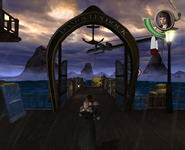