Killed by Stew Mitchum with a Poison Dart[1]

Dashiell Qwerty is the sub-librarian of Stain'd-by-the-Sea's library and a member of VFD.

Dashiell Qwerty was a member of VFD who was positioned as a sub-librarian in Stain'd-by-the-Sea. He was only a sub-librarian because the poor town could not afford a permanent one.[3] He befriended several of the children in town, such as Jake Hix and Moxie Mallahan, and he introduced them to several of their favorite authors.[1] He also would go to Black Cat Coffee on occasion.[2]

When S. Theodora Markson and her apprentice, Lemony Snicket, were transferred last minute to Stain'd-by-the-Sea, Qwerty was ordered to keep an eye on them.

Lemony Snicket enters the library and finds Qwerty at his desk, swatting at several moths. He suggests that Snicket research Dame Sally Murphy, but Snicket asks to look up old stories about strange creatures. Qwerty leads him to the mythology section ane allows him to browse on his own. When Stew Mitchum arrives an antagonizes Snicket, Qwerty orders him to leave. He informs Snicket that Stew is a nuisance.

Snicket is told that he can't check out books, as he does not live in town, Qwerty informs him that he can come in and read anything he likes, again implying that he is interested in theater. He also tells him that he can request a book in the city, and Snicket uses the opportunity to send his sister a message at the Fourier Branch, saying, "Sorry, But I Cannot Meet You At The Fountain."

Snicket returns the next day, as Qwerty is about to unpack the zoological books. He informs Snicket that he received a request from the Fourier branch, reading "Don T. Worry, I'll Measure It Myself." Snicket requests another book, "Please, Be Very, Very Careful." Snicket later finds Qwerty checking the book jackets, telling him that often something is slipped into the cover of another, cluing Snicket in that he was not given the Bombinating Beast statue, as he'd thought.

When Snicket manages to get the real Bombinating Beast statue, he hides it in the library, replacing the lump in the hidden package with three books and hiding the statue behind An Analysis of Brown, Black and Beige.

Qwerty curiously witnesses Snicket and Ellington Feint enter the library the next day to retrieve the statue.

As some books have gone missing recently- presumably the books Snicket snuck out- Qwerty begins to completely reorganize the library, and install a sprinkler system to prevent fire. When Snicket and Moxie enter, Qwerty recommends them the book Despair, mentioning that the plot involves "two people who do not look at all alike but nevertheless hatch a nefarious plan" (implying that he knows about Ellington and Cleo Knight's situations).

After beginning to research chemistry and Colonel Colophon, Snicket finds Qwerty reading a book on oysters, and asks if he has any books on laudanum or other sleeping draughts, histories of chemical espionage, or anything about Colonel Colophon and the clinic named after him. Qwerty then informs the apprentice that most of those books were just checked out, and Snicket sees a woman leaving with several books, and sees that she'd returned the three books he'd smuggled out and sent to Hangfire as a decoy statue. Qwerty, per his duty as a librarian, does not reveal any information about her, so Snicket follows her out.

While Moxie is still researching, Qwerty stops by to check on her and leaves a book on the table that clues her into the Inhumane Society's involvement with Colonel Colophon.

Qwerty interrupts Snicket as he reads a book and asks if he could help some patrons of his, as the boy's become known to be good at helping people, and also the library is closing and he probably has nothing better to do. Snicket agrees, and Qwerty closes up the library and brings him through the quiet streets of town. After several blocks, Qwerty leads him through a hole in a chain-link fence to meet his patrons- a group of drifters who are currently visiting Stain'd-by-the-Sea.

Qwerty takes him to a shady spot of trees, where the drifters have set up camp. The group greets him warmly, asking if he's going to read to them again, as he'd left them the night before on a cliffhanger "where the bookcase fell on him." Qwerty reminds them that they'd told him that Randall had some trouble, and he'd brought Snicket to help. Snicket listens to Randall's story, and then Qwerty walks him home.

Snicket recieves a message asking for help retrieving a postcard, and he follows some clues to the library, where Qwerty is shaking ou ta book, as "a certain reader" tends to leave things behind in books she borrows, such as two shed snakeskins and a very fine doily. Snicket goes to the dictionary, and when he can't find what he's looking for, he asks the sub-librarian about the Yamgraz. Qwerty gets excited and tells him that the Yamgraz were the indigenous people of Stain'd-by-the-Sea, and that they were now gone due to the colonization of Stain'd-by-the-Sea that took away their chief product, the oysters. He brings Snicket to the history section, where he finds the book he was looking for that holds the lost postcard.

After Snicket gets disinterested in a book and decides to leave the library, he asks Qwerty how the outside is so foggy if there's no large bodies of water left in Stain'd-by-the-Sea, as he finds this fact suspicious, as well as several things around town. Qwerty reminds him that while these may all seem like suspicious incidents to him, he himself is a suspicious incident to the town. He asks Snicket what he's up to, to which Snicket replies that he'd like to take a walk.

At some point, Qwerty arranged to deliver Caviar: Salty Jewel of the Tasty Sea to Ellington Feint, in order to help her figure out Hangfire's plot.

Qwerty checks up on Snicket, who is supposedly reading Caviar: Salty Jewel of the Tasty Sea. He recommends Italian dictionaries to him and tells him that he'd just installed the sprinkler system in the library in case of fire and that the controls had just been put into the northeast corner of the library. When Moxie enters, looking for Lemony, Qwerty excuses himself and starts swatting at moths.  S. Theodora Markson and Snicket start investigating a supposed string of arsons in town. As two of the buildings hit- one that provided wool for the moths of a man named Harold Limetta and Harold Limetta's own home, which housed the moths, Theodora and Sharon Haines conclude that Qwerty is the arsonist, as he would want to get rid of the moths that plague his library.  Qwerty figures out that he's being framed and goes to Black Cat Coffee, where he meets Snicket before Harvey and Mimi Mitchum arrive to arrest him. Qwerty asks that Snicket deliver Caviar: Salty Jewel of the Tasty Sea to Ellington, and tells him that "if there's a book [he] wanted to finish," he should do it soon.

Qwerty is put onto the train that goes from Stain'd-by-the-Sea to the city in order for trial. He is kept in Prison Car One with Ellington Feint, who had been arrested for supposedly trying to burn down the library; Qwerty is informed that while the library was not set on fire, the sprinkler systems destroyed the books inside- most importantly, Caviar: Salty Jewel of the Tasty Sea.

Having figured out that Qwerty was her VFD monitor, S. Theodora Markson sneaks onto the train disguised as a conductor, bringing another disguise for Qwerty. Qwerty refuses to leave, wanting to deliver important information about Hangfire to the city that will be able to put a stop to his plans, but Theodora keeps insisting, caring mainly about her evaluation marks.

At that time, Stew Mitchum, working for the Inhumane Society, crashes through the window of the train and murders Qwerty with a poison dart, intending to frame Theodora for the crime.

Later, Jake asks Snicket why, if he suspected Qwerty was a member of VFD, he never asked him; Snicket responds that "You don't ask if someone has integrity and pluck and has read a great many books in the hope of repairing the world. You just watch them, and figure it out for yourself."

Mimi Mitchum: That ruffian. I don't trust anyone who doesn't spend time on his appearance.
Lemony Snicket: I'd say he spent lots of time. That haircut looked like it took hours.
—Who Could That Be at This Hour?

Snicket describes Qwerty as being "younger than the father of anyone [he] knew" and younger than librarians are thought to be, as well as having a "ragged, angular mess"[4] of hair. He usually wears a black leather jacket decorated with small scraps of metal.

He is described as having an incredibly deep voice and almost always having a blank expression on his face. He also often has a pencil kept behind his ear.[3]

Lemony Snicket: That reminds me. Have you heard back from the Fourier Branch about that book I ordered?
Dashiell Qwerty: "But I cannot meet you at the Fountain," by that Belgian author? No, nothing yet, I'm afraid. Although I did receive a somewhat mysterious request from that very branch. Someone is looking for a book I've never heard of before.
Lemony Snicket: What's it called?
Dashiell Qwerty: The author is Don T. Worry, and the title is I'll Measure It Myself. Sounds like a math textbook of some kind.
—Chapter Eight

Dashiell Qwerty: I see you're still carrying the same burden I saw you with this morning.
Lemony Snicket: So it would appear.
—Chapter Ten

Lemony Snicket: I was just looking for something to read.
Qwerty, making a wide gesture: Make yourself at home.
—Chapter Ten

Lemony Snicket: Excuse me, but I haven't found what I'm looking for.
Dashiell Qwerty: A common complaint.
—Chapter Six

Lemony Snicket: You've mentioned those threats before, but you've never said anything more about them.
Dashiell Qwerty: Yes, I have, and no, I haven't.
—Chapter One

Lemony Snicket: I've never seen you here, particularly during branch hours.
Dashiell Qwerty: I like the coffee. I don't know when I'll get another cup.
—Chapter Four

Lemony Snicket: I know you didn't burn those buildings down.
Dashiell Qwerty: You know no such thing. There are people in this town who believe I'm a criminal, and soon there will be many more. There might as well be a picture of me in the dictionary, inked under A for arsonist.'
Lemony Snicket: Are you saying that being a criminal is a matter of opinion?
Dashiell Qwerty: No. It's a matter of handcuffs.
—Chapter Four

Gif of Qwerty in the library. 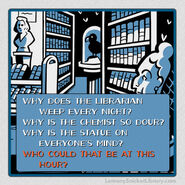 Dashiell Qwerty in the library.

Qwerty checks up on Snicket.