Accidentally fatally injured by a harpoon gunshot by the Baudelaires, then drowned in a pond.

Dewey was a V.F.D. member much like his triplet brothers, Frank and Ernest. He was on the fire-fighting side of V.F.D. Dewey was one of the founders and managers of the Hotel Denouement.

Like Kit Snicket and Jacques Snicket, Dewey was four years old when The Schism began. On the night his parents were hanging balloons for the triplets' fifth birthday, Dewey and his brothers were taken by V.F.D. The woman driving the car took the Denouement brothers to the mountain headquarters to begin their V.F.D. training.

Dewey reveals that the same night he and his brothers were recruited, their parents perished in a fire that destroyed the family home. It is strongly implied that Count Olaf was responsible for the fire.

In his library, located under Hotel Denouement's pond, he was building a catalog of evidence to be used against every villain. He also hid the Sugar Bowl there, so that Count Olaf could not find it. His catalog was, as he called it, his life's work and he died among all his hard work as he drowned.

In the book series, Dewey may have been in a relationship with Kit Snicket. He is father of Beatrice Snicket (Beatrice Baudelaire II). However, Dewey was living at Hotel Denouement with his brothers instead of with Kit as she prepared for the birth of her child. Given how in the books Dewey was ready to adopt the Baudelaires and have them all live and work in the Hotel, it is inconsistent with his characterization as a capable, mature, and fatherly man for him to be the uninvolved father of Beatrice Snicket. The Netflix series confirms him to be the father of Beatrice II, though.

Dewey is not mentioned directly by Kit to the Baudelaires, but it is possible that Dewey is the "gentleman" who volunteered to set up and clear away the picnic. If he is the one who put together the picnic, it is interesting that he included coffee, allowing Kit to drink two cups one right after the other. But as it'S known Kit has done many dangerous things during her pregnancy as water skiing and driving without a seat belt.

He meets the Baudelaires in the lobby, descending via a long rope, apparently eavesdropping on their conversation. He attempts to talk to them using the Sebald Code to communicate with them, however, they didn't know this code and do not respond, leaving him suspicious. When Sunny Baudelaire says, "The world is quiet here." at night in the hotel lobby, it echoes which prompts Dewey to appear from a rope in the ceiling. He offers the Baudelaires to come with him, but Violet is apprehensive and suspicious. He mentions he knew Bertrand Baudelaire, and the Baudelaires eventually follow him.

Later, Count Olaf is surprised to discover Dewey is a real person, saying he thought of him as a legendary figure, which implies Dewey's existence in the shadows is so secretive that he has become a sort of urban legend. Despite this Olaf and Dewey seem to have some history together, with Olaf possibly having played a role in the death of members of the Denouement family. Because Olaf would have been only a baby or not even born at the time of the Denouement parents' deaths, it is extremely unlikely that he was directly involved in their deaths, and likely is referring to other members of the Denouement family.

When Count Olaf confronted him, Dewey did not reveal the location of the sugar bowl. He gave three hints to the lock combinations to the laundry room as proof that the sugar bowl was not there.

Unfortunately, after police arrived, Count Olaf thrust his harpoon gun into the Baudelaires' arms, who dropped it and accidentally set it off, sending the harpoon through Dewey's stomach. Dewey reassured the Baudelaires that it was not their fault and whispered "Kit" before sinking completely into the pond concealing the real Hotel.

In the TV series, Dewey appears much earlier in the episode he appears in compared to the book series, and his appearances prior to his death have been significantly altered.

Dewey first appears after the Baudelaires leave Kit outside Hotel Denouement. He visits Kit before she leaves on her mission, discussing their potential future with their child on a tropical island after retiring from V.F.D. Kit feels their child is female, but regards it as a feeling, which is eventually shown to be their child's true gender. Dewey then expresses how much he would miss her, and after telling him to give her regards to his brother Frank, she leaves to her taxi, and Dewey heads into the hotel.

Dewey appears shortly later as the third sibling the Baudelaires meet at the receptionist desk, where he explains that the hotel is categorized as a library, stating it "is a library." After three bells on three different floors ring, Dewey excuse the three Baudelaires to their proper locations, but not before being questioned whether he is Frank or Ernest, to which he states, "That is an interesting question."

Dewey is seen later in Sunny's plot talking with Larry in the hotel's restaurant's kitchen, where, after seeing her eavesdrop on their conversation, escorts her through a service elevator, telling her to place a Vernacularly Fastened Door on the entrance to the laundry room. After installing the lock, Dewey states the importance of the room (but never reveals its true purpose) and asks Sunny if he can trust her, to which she replies, "if I can trust you," but gets cut off by the clock ringing, ending her plot with Dewey. This lock is later show to be a decoy meant to deceive their enemies, as the sugar bowl never appears in the room.

When the Baudelaires discover a secret basement in the hotel containing various library shelves, Dewey asks if Kit has returned, but becomes confused at the sight of the Baudelaires, stating that they aren't Kit, to which the Baudelaires reply that he is neither Frank nor Ernest. Dewey then reveals himself as the third Denouement brother, also revealing that they are triplets rather than twins. He once again states that the hotel "is a library," and the Baudelaires follow him through a V.F.D. tunnel leading outside the hotel. Upon exiting, he explains that he needs to secure and catalog their research, and that while his brothers work above in the hotel, he does his work below, only appearing as one of them by taking advantage of their identical appearance.

Dewey then reveals to the Baudelaires their hidden library, a sub-library hidden beneath the surface of the hotel's pond that contains the organizations most valuable intel and secrets. He explains that even if the location burns down, the great library would be safe and hidden away from wicked members of V.F.D. When Violent asks Dewey why he is revealing such a valuable secret, he explains what Kit and himself have discussed, that they will leave V.F.D. with their child and leave the library to them, making the three of them its potential sub-librarians if they were to succeed, and he would trust them to take care of it because of their excellent talents.

When Klaus asks Dewey about the contents of the sugar bowl, Count Olaf interrupts him as emerges behind the bushes, and after being in disbelief after seeing Dewey, who he assumed to be a myth, Dewey counters Olaf by telling him he is outnumbered by all the volunteers and that his accomplices will arrive late. Esmé Squalor and Carmelita Spats show up, with Carmelita still holding the harpoon, and the four volunteers discover from Esmé that they will use the Medusoid Mycelium to poison the entire hotel. Dewey states they wouldn't do it without the sugar bowl, but Esmé states that once the crow holding it is shot with the gun, it will drop in the same laundry room Dewey told Sunny to secure, which she then mentions as the one problem she will encounter while trying to retrieve it.

After Dewey and Esmé argue over her actions and the sugar bowl, Olaf threatens to shoot Dewey with the harpoon. The Baudelaires step in so that they would die along with Dewey if he were to fire, but they end up approaching Olaf and successfully seize his weapon before he can fire. Unfortunately, upon doing so, Mr. Poe steps outside, in shock over the scene that is occurring, and the Baudelaires, now surprised by his appearance, drop the harpoon gun on the ground, triggering it and shooting a harpoon straight into Dewey's torso, accidentally wounding him and causing him to drown in the pool after muttering Kit's name to the children. Dewey's body then sinks down to the bottom of the library, ruining their chances at succeeding, as well as the future he and Kit had planned for their daughter.

During the trial, as Justice Strauss mention the manager's death, Frank and Ernest look down in sorrow and remorse for the death of their sibling, and his death also added an extra part to the trial on whether the Baudelaires were guilty or not. On the island, when Kit asks the Baudelaires about the status of her husband, they reveal to her his death, and she sorrowfully realizes that her child would never be able to meet him. The three Denouement brothers are portrayed by Max Greenfield in the TV series.

Dewey in the Russian version.

Dewey and the Baudelaires 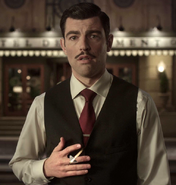 Dewey shot by the harpoon gun.

Dewey falls into the pond.