Dr. Flammarion is, or probably was, a doctor employed at the Colophon Clinic. His assistant, Nurse Dander, is crafty with knives.

Dr. Flammarion attempted to help Hangfire destroy Stain'd-by-the-Sea during the time the Inhumane Society terrorized the city. In the process, he drugged Doretta and Ignatius Knight with laudanum and kidnapped their daughter Cleo.

Dr. Flammarion was a member of the Inhumane Society, and he was charged with drugging Ignatius and Doretta Knight in order to keep them in a confused state. He was appointed the family apothecary as he pretended to give the Knight couple medication, which left their daughter, Cleo, feeling very lonely.

As the Knights were planning to move out of town, Cleo made her own plans to run away, as she had been testing a formula for invisible ink that actually works. When she made her attempt, though, Flammarion pierced the tire of her car and offered her a ride, at which point he kidnapped her and held her in the cellar of Colophon Clinic, forcing her to continue her research so the Inhumane Society could steal the formula.

When Lemony Snicket and his associates stormed the clinic, Cleo convinces Flammarion to lend her a hairpin, which she uses to pick the lock on her chain. She then confronts him as Snicket and Jake Hix open the cellar door for her, and she hands him and his associate, Nurse Dander, over to the Officers Mitchum.

Flammarion is described as a round little man with round little glasses, and a small beard on his chin that "looked like it was trying to escape from" his nasty smile. He also is noted to have unbrushed teeth.[1] 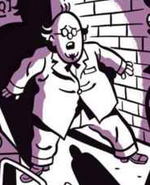