Elder Jemma is one of the 3 elders of the Village of Fowl Devotees.

She, along with elders Sam and Anabelle, are only directly named in the TV series adaptation of the book.

Elder Jemma was one of the 3 elders “welcoming” the Baudelaires into the Village. She is the more gentle-speaking of the three.

Jemma is later seen when Count Olaf (disguised as Detective Dupin) and Esmé Squalor (disguised as Officer Luciana) first introduce themselves and later when they bring in “Count Olaf” (actually Jacques Snicket) into the Town Hall to decide his punishment, burning at the stake.

Later, she and the other elders say that the Baudelaires are to be burned at the stake after Detective Dupin frames them for the death death of “Count Olaf” and for the use of the prison blueprints and a smashing device. She goes with the mob with pitchforks to burn them.

When Violet reveals that Officer Luciana has a harpoon gun, Jemma and the other Elders sees this and react to the use of a harpoon gun in violation of the no mechanical devices rule. After Officer Luciana accidentally kills a crow while trying to shoot Hector's mobile home, she and those present get angry at Officer Luciana and Detective Dupin with the latter having failed to keep the Baudelaire children incarcerated. Esmé and Olaf leave the village as fast as they can using the getaway car from Olaf’s associates.

Jemma later goes to Hotel Denouement where she is a guest. When the guests were awoken by the death of Dewey Denouement, Jemma interacts with Mr. Poe who states to her that he no longer believes some stories from The Daily Punctilio. The next day, Jemma attends the trial of the Baudelaires and Count Olaf where she applauds the Baudelaires after they made their speech. When asked by Count Olaf if the Baudelaires waited out their sentence, she stated that "the baby busted them out" where Klaus stated to Jemma that she tried to have them burned at the steak. After the trial attendees drank water following their consumption of the over-peppered sausages that Esmé Squalor had Carmelita Spats serve, Jemma was surprised that the sausages were made from crow when she thought it was made from chicken. She later calls the Baudelaires murderers. It is unknown if she survives the fire at the hotel. Elder Jemma is portrayed by American actress Carol Mansell. 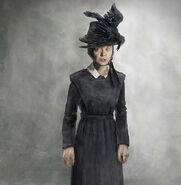