Ishmael: Mutiny? Who dares talk of mutiny?
Erewhon: I dare. I'm tired of your facilitation, Ishmael. I washed ashore on this island after living on another island even farther away. I was tired of a peaceful life, and ready for adventure. But whenever anything exciting arrives on this island, you immediately have it thrown into the arboretum!
Ishmael: It depends on how you look at it. I don't force anyone to throw anything away.
—The End

Erewhon is one of the islanders the Baudelaires meet in The End.

Erewhon is an old woman by the time of The End. She lived on an island herself and was tired of a peaceful life and ready for adventure. However, she ended up washing ashore on another Island run by Ishmael; She seems to have arrived after Miranda Caliban, as she believed her story of Thursday dying in a shipwreck. It is unknown why she chose to stay, though Ishmael's use of peer pressure likely had something to do with it. Erewhon and Weyden's job on the island was to lay the harvested seaweed out to dry.

Miranda traded Erewhon a picnic basket in exchange for her secretly teaching her the backstroke, which Ishmael believed was not the customary way to swim. Sadie Bellamy somehow found out about Erewhon's basket.

Erewhon is dissatisfied with Ishmael's way of facilitating, as Ishmael has anything exciting thrown into the arboretum. She secretly plans a mutiny with several other colonists, including Finn. She convinces them that they will need weapons for the mutiny, just in case Ishmael and his supporters do not leave quietly.

Erewhon goes storm-scavenging the day that Violet, Klaus and Sunny Baudelaire wash ashore. She finds a pair of skis and brings them to Ishmael; he finds them impractical, and though Klaus mentions that he's read of people who used skis to cross mud and sand, Erewhon eventually agrees and puts the skis on the sleigh.

She is among the crowd of islanders who go storm-scavenging the day that Count Olaf and Kit Snicket wash up ashore, with Kit on a raft of books. They decide that they must fetch Ishmael to decide what to do with them, and Erewhon questions how to get Ishmael to the coastal shelf on his injured feet; Sherman assures her that the sheep can drag him there on the sleigh. The crowd leaves Friday Caliban and the Baudelaires to guard Count Olaf.

When they return, the Incredibly Deadly Viper swims up to them, and though Friday claims it to be friendly, Erewhon believes it looks deadly and suggests they dump it in the arboretum. She follows along with Ishmael when he suggests they abandon the Baudelaires, Olaf and Kit on the coastal shelf.

However, later that night, she and Finn go to the Baudelaires, with Erewhon bringing them onion soup in her picnic basket. She asks that they keep the secret of their coming, and then they tell the children one more secret- several colonists are tired of the way the island is run, and are panning a mutiny over breakfast during Decision Day. Their plan is to force Ishmael onto the outrigger and push him out to sea, along with his supporters. They assume they will have to fight, and her and Finn request the Baudelaires go to the arboretum and fetch them weapons. The Baudelaires agree on the condition that Finn and Erewhon get Kit to a safe place.

Erewhon and Finn promise to stay with Kit, but Count Olaf is imprisoned nearby, and he convinces them to release him from his cage in exchange for him helping with the mutiny, saying that the Baudelaires will fail to bring them weapons. The two colonists then end up leaving Kit on the coastal shelf upon breakfast in order to take part in the mutiny. The Baudelaires arrive with Ishmael, and Erewhon is upset that the children did not bring weapons.

The mutineers dissolve into argument, and Erewhon argues that her hiding a picnic basket is better than Sunny hiding a whisk. During the argument, Olaf arrives and declares himself King, which confuses Erewhon, as that wasn't part of the plan. Ishmael retaliates by shooting Olaf with a harpoon gun, which releases the Medusoid Mycelium hidden under his robe. Erewhon feels something in her throat, and the Baudelaires reveal that the Mycelium has poisoned them.

Ishmael suggests the islanders drink cordial to try and dilute the poison, and the fermented cordial drugs them into compliance. He convinces them that the Baudelaires are the root of the trouble, and then gathers them on the outrigger and has them sail off towards Lousy Lane for a cure, though they will not make it in time to save their lives. The Baudelaires attempt to help them, bringing the cure in bitter apples, but Erewhon, still bitter at them, claims that she doesn't want to hear more of the children's treachery.

It is unknown if she met her fate by being poisoned by the Medusoid Mycelium. It is noted that the Incredibly Deadly Viper followed the boat with an apple, and as the Baudelaires did not know this, it is possible some islanders survived to report this to Lemony Snicket. Friday knew the snake to be friendly, and thus may have taken the apple from it; however, it is unknown if she would have been able to convince Erewhon or the drugged islanders to eat it.

Erewhon: We are here to tell you that a mutiny will take place at breakfast. More and more colonists are getting sick and tired of the way things are going on the island, and Ishmael is the root of the trouble.
Sunny Baudelaire: Tuber?
Klaus Baudelaire: "Root of the trouble" means "the cause of the islander' problems."
Erewhon: Exactly, and when Decision Day arrives we will finally have the opportunity to get rid of him.
Violet Baudelaire: Rid of him?
Erewhon: We're going to force him aboard the outrigger right after breakfast, and push him out to sea as the coastal shelf floods.
—Chapter Eight

Violet Baudelaire: I don't know.
Erewhon: You don't know? We brought you supper, and Ishmael left you out here to starve, and you don't know whose side you're on?
Finn: We trusted you when you said Count Olaf was a terrible person. Why can't you trust us, Baudelaires?
Klaus Baudelaire: Forcing Ishmael to leave the island seems a bit drastic.
Erewhon: It's a bit drastic to put a man in a cage, but I didn't hear you complaining then.
—Chapter Eight

Kit Snicket: I won't hear of you putting your talents to such nefarious use, Baudelaires. I'm sure the island can solve its difficulties without resorting to violence.
Erewhon: Did you solve your difficulties without resorting to violence? Is that how you survived the great struggle you mentioned, and ended up shipwrecked on a raft of books?
Kit Snicket: My history is not important. I'm worried about the Baudelaires.
—Chapter Eight

Violet Baudelaire: You left Kit out there alone? You promised you'd stay with her.
Erewhon: And you promised us weapons. Where are they, Baudelaires?
Klaus Baudelaire: We don't have any. Ishmael was at the arboretum.
Erewhon: Count Olaf was right. You failed us, Baudelaires.
—Chapter Eleven 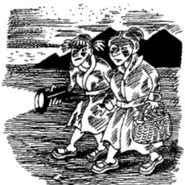 Erewhon and Finn on the beach in the Russian illustrations.