Due to The Great Unknown (possibly, books)
Alive (TV series)

Fiona, known as Fiona Widdershins in the Netflix adaptation (it is unknown if she took her stepfather's surname in the books), is a young mycologist apprenticed under V.F.D. and an (unofficial) member of the Queequeg crew. She is the stepdaughter of Captain Widdershins and the sister of Fernald.

She is shown to be trusting of strangers, as she quickly befriended the Baudelaire children when they boarded the Queequeg, and showed them how to pull their own weight while aboard.

In the books, she dislikes how male pronouns (he, him, his) are often used as a default in the English language, as she always adds "or she" whenever her stepfather used his motto, "He who hesitates is lost!" Widdershins does not change his motto, however, possibly because it has become an in-joke between them, or he does not care about her feelings on the subject.

Fiona's personality is similar in the Netflix series, though she is under the stress of Captain Widdershins' absence coupled with having to lead the Queequeg in his stead. This sometimes causes her to snap at others, especially Violet. This version of Fiona has been forced to be more independent and sometimes serious.

Fiona is the stepdaughter of Captain Widdershins. Her biological father moved away when she was young, so she lived with her mother and older brother, Fernald.[2]

She recalled from her past that Fernald used to study poetry with their stepfather and that they would often have arguments when they thought she was asleep. The only memory Fiona mentions of her mother is that she used to become angry when she neglected to clean her room. Widdershins tells Fiona that her mother died in a "manatee accident," though Fiona never believed his story.[2]

She first met Count Olaf when she was an infant, when he would attempt to throw thumbtacks into her cradle.[2]

Fiona took an interest in mycology, though her stepfather disapproved of her interest, claiming it was useless. He also refused to tell her several V.F.D. secrets, claiming they were too terrible for her to know.[2]

Though Fiona lived aboard the Queequeg for much of her life and continued to fix the ship when necessary, her stepfather doesn't consider her part of the crew. The submarine eventually fell into disrepair, after being attacked continuously by villains, leeches, sharks, realtors, pirates, girlfriends, torpedoes and angry salmon.[2]

At some point, the Widdershins had collected documents from the remains of Josephine Anwhistle's house after it fell into Lake Lachrymose. Fiona questioned her stepfather as to why they couldn't help the Baudelaire children, to which he answered that it's important they "do one small noble thing". Widdershins never elaborated on the explanation.[2]

After picking up Phil as a cook on the Queequeg, the submarine's crew was charged with retrieving the Sugar Bowl, which had fallen into the Stricken Stream.[2]

Fiona greets the Baudelaire children when they were brought aboard the Queequeg almost immediately after crashing into the stream. When she fails to convince her stepfather to let them rest instead of immediately getting to work as he mandated, she helps them settle in and asks Phil, who she calls "cookie" to open their celebratory soda.

She and Klaus Baudelaire work together to study tidal charts to try and trace the sugar bowl's path, leading them to eventually discover that it went below the destroyed Anwhistle Aquatics into a place marked, "GG". Klaus figures out that it is a cave, to which Widdershins tells him that if he finds the sugar bowl he has his permission to marry Fiona, which the latter finds embarrassing. She manages to steer the conversation back to the matter at hand by revealing that "GG" was mentioned in one of her mycology books and it turns out that the abbreviation is short for the Gorgonian Grotto. The cavern serves as a quarantine for a deadly fungus, the Medusoid Mycelium.

She accompanies the Baudelaire children to the grotto in hopes of finding the sugar bowl. The search party was trapped for several hours by the waxing Medusoid Mycelium, causing their search to be difficult. Though they had no luck finding the bowl, Fiona finds a letter from Kit Snicket to Gregor Anwhistle, instructing him to stop cultivating the Medusoid. While they were sitting, the Baudelaires also decide to make a code based on food in order to communicate with each other and keep their secrets safe.

Fiona and the Baudelaires were forced to accept that the sugar bowl was nowhere to be found, so they returned to the Queequeg, only to find it mysteriously abandoned. Fiona became distraught that her stepfather and Phil left the ship, but she is left with little time to despair since her stepfather's absence means she is forced to take over as its captain. Unfortunately, just before she could decide what to do next, Count Olaf captures the submarine and captures the children with the intent to torture them into revealing the location of the Sugar Bowl. However, once in the brig, Fiona reunites with Fernald, the hook-handed man. Violet informs Fiona that Fernald was the perpetrator of the fire that destroyed Anwhistle Aquatics. The latter rebuts this claim by explaining to them that people aren't either wicked or noble, but like chef's salads. Although the Baudelaire children find his perspective hard to believe, they understood Fiona's attachment to him and decide to hear him out.

Fernald agrees to help the kids escape on the condition they allow him to come, which Fiona quickly agrees to. They try to sneak back to the Queequeg, but everyone was caught by Esmé Squalor and Carmelita Spats. Fiona feigns interest in joining Olaf's troupe to explain why no one was in the brig and uses it as a ruse to buy the Baudelaires time to escape.

Fiona is later approached by Count Olaf, who offers to help her find her stepfather if she kept her word to join him. Captivated by the thought of finally reuniting her family, she agrees and watches as Olaf re-capture the Baudelaires. She willingly gives him the Medusoid Mycelium they have quarantined in Sunny's helmet, but lets the Baudelaire children go instead of taking them prisoner. Before leaving, she tells them that when they think of her to visualize a food they love very much. She then kisses Klaus and departs, leaving the latter heartbroken.

Fernald and Fiona immediately double-cross Olaf and hijack his submarine.[3]

What happens next is unclear; though Lemony Snicket claims that Fernald fought the Quagmires on the mobile home before it crashed,[3] Kit Snicket claims that she and Widdershins reunited with Fernald and Fiona on the Queequeg, which was then crashed into by the Self-Sustaining Hot Air Mobile Home- holding Hector, Duncan, Isadora and Quigley Quagmire. She tells Klaus that Fiona was desperate to make amends with him and reconcile their friendship.

After the crash, everyone was left in the ocean and approached by the Great Unknown. All but Kit decided to take their chances with it, but whether it saved them or ate them is uncertain. All that is said about these circumstances is that, while the Baudelaires were traveling to The Island's arboretum, the Quagmire triplets (who were among the shipwrecked) were "in circumstances just as dark although quite a bit damper than" theirs.[4]

In the TV series, Fiona is now the captain and is known as Fiona Widdershins, portrayed by Kassius Nelson. Her stepfather is omitted from the show. She also has a slightly British accent. Unique to the TV series is Violet's mistrust compared to the book; she warns Klaus that Fiona may not be sincere.

She is the captain since Widdershins left to answer a distress call from a manatee, and after picking up the Baudelaires, she is entirely focused on her mission of finding the sugar bowl. Fiona and Violet enter an argument about what they should be doing, especially once Violet begins questioning Fiona, causing Fiona to shout, "I am the captain and that is an order!" Fiona immediately apologizes, saying she has been under stress ever since Widdershins left. Fiona admits to Klaus that she doesn't know what's inside the bowl; the two of them bond over their parents keeping secrets from them.

They later trace the sugar bowl to the Gorgonian Grotto, and though Fiona is scared of the Medusoid Mycelium, she takes Violet's advice and agrees to let them go. The Great Unknown appears, and Fiona turns off everything on the submarine in order to hide from it. Afterwards, the Baudelaires suggest reading Lemony Snicket's account of it while they head for the grotto.

The submarine is boarded by Count Olaf and his troupe, but Fiona manages to hide. She sends a distress telegram to Kit Snicket, before being caught by Fernald. However, Fernald lets her go and she remains hidden on the Queequeg.

The Baudelaires escape Olaf and return with a sick Sunny, and Fiona helps Violet repair the telegram machine before helping them research an antidote to the Medusoid Mycelium in order to save Sunny; the fungus is trapped in a helmet, which the Baudelaires give to Fiona as a gift. She then receives a telegram telling them to go to the Hotel Denouement. She refuses to leave until Fernald arrives, but the Baudelaires don't trust him.

Olaf arrives again and tries to kill Fernald for betraying him. In order to save her brother's life, Fiona gives Olaf the Medusoid Mycelium. He then convinces her to join his troupe and orders her to put the Baudelaires in the brig. Instead, however, once he leaves, she allows them to escape and promises to help free the Snow Scouts trapped on Olaf's ship. She kisses Klaus and departs.

When Olaf discovers her betrayal, he locks her and Fernald in the brig, which they are able to escape using Fernald's hooks. When Olaf, Esmé and Carmelita leave the submarine, they steal it and depart.

It is implied she is able to reunite with her stepfather when she hears his voice on a radio in The End. 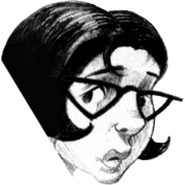 Fiona in the kitchen in the Russian version.

Fiona swimming in the Russian version.

Fiona reading a mycology book in the Russian version.

Fiona in the Russian version.

Fiona and Fernald reunite in the Russian version. 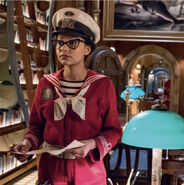 "So you're not dangerous?"

"No, in a manatee accident."

Turning the lights back on.

Fiona looks at a photo.

Hiding from the Hook-Handed Man.

"She who hesitates is lost!"

Looking at a photo.

Refusing to leave her brother.

"What choice do I have?"

"Take care of the Queequeg for me."

"Think of a food you love very much."

Fiona in the brig.

Fiona and Fernald onboard the Carmelita.
Español Français Português do Brasil Русский
Community content is available under CC-BY-SA unless otherwise noted.
Advertisement