It rests in the uptown side of the Village of Fowl Devotees, in the middle of a courtyard with many different streets leading out of it. Across from it is the Uptown Jail.[1]

The fountain is shaped like a large crow, and is made of metal, covered in carvings of feather shapes to make it more realistic. Water streams out of a hole in the fountain fashioned to look like a beak, and as Lemony Snicket claims- 'the effect was hideous'. It makes it look as if the bird is spurting water.

Unknown to many, the fountain has a hidden mechanism button in its eye, allowing the beak to open so at least two somewhat human-sized objects can be placed inside. (In the Netflix series, the mechanism is a lever made to look like a beak.[2])

The crows chose to roost there while they were in the uptown in the morning, and take baths in the water.[1]

It was described as having been built very recently before its placement, "from someone's hideous blueprint."

The elders loved the fountain and requested the Baudelaires keep it "as clean as possible." The children had to polish it as part of their chores.

Isadora was able to smuggle coded couplets onto the crows that roosted on the fountain, which reached the Baudelaires while they were living with Hector, the town's handyman. The Baudelaires deciphered the true meaning of the couplets in the nick of time, and were able to free the Quagmires before helping them to escape.[1]

The fountain on a German cover.

The fountain in the TV series. 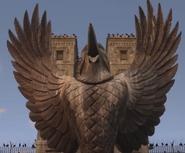