Gifford: We told you our jobs, and you mucked up our plan but good.
Lemony Snicket: What do you mean?
Gifford: "But good" is a phrase you can put at the end of a sentence to give it particular emphasis. Someday we'll explain it to you but good.
—Why Is This Night Different from All Other Nights?

Gifford is a chaperone and a minor antagonist in All the Wrong Questions.

Gifford became a VFD chaperone, and is described as "one of the worst volunteers."[1]

Lemony Snicket and his sister, Kit, planned to break into the Museum of Items to steal an artefact. Gifford and Ghede wanted this plan to succeed for their own reasons, and when they found out that VFD was planning to transfer Snicket out of town, they disguised themseleves as his parents and brought him to the Hemlock Tearoom and Stationary Shop before he could leave on the train, intending to drug him with laudanum to kidnap him and keep him in the city. However, their disguises did not fool him, and his chaperone, S. Theodora Markson, helped him escape.

After Kit fails to break into the museum herself, Gifford and Ghede are assigned to her case. They were supposed to help, but ended up making things worse.

Gifford and Ghede were assigned to transport Kit to the city and make sure nobody messed with her or any other volunteers onboard. They disguised themselves as conductors, and while checking for tickets, they found Snicket, sitting with Moxie Mallahan. Snicket is very cold towards them, and as he does not have a ticket, he implies to them that if they try to take him away, he will tell Moxie everything. They also nearly catch Ornette Lost sneaking onto the train, but she distracts them and sneaks away. Later, Moxie goes to fetch them to try and catch Hangfire.

After the train crashes, Gifford and Ghede tell Snicket that he mucked up their plans by not allowing them to abduct him. When Theodora arrives, they ask for her and Snicket's help resetting the train, but Snicket chooses to leave instead.

Gifford is described as large-shouldered.[2] While disguised as Jacob Snicket, he wore a brown, linty suit. The illustrations give him dark hair. 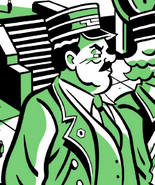