Unknown
The Gorgonian Grotto is an underwater cave located near the Mediocre Barrier Reef, underneath the former site of Anwhistle Aquatics. Currents of water originating from the Stricken Stream terminate here, carrying in debris. The cave is a quarantine for the Medusoid Mycelium[1].

The walls and floor of the conical entrance to the grotto are covered in mosaics depicting noble events in the history of V.F.D., as well as portraits of famous writers, artists, scientists, musicians, philosophers, and chefs who inspired the members. Above this area, various Vertical Flame Diversions and other secret passageways lead up to the former marine research center and rhetorical advice service at Anwhistle Aquatics. The cave contains a pumping machine that could once drain the entire grotto or flood it with seawater in a matter of minutes, but this device is now rusted, leaving the entrance to the grotto completely submerged in seawater. The lighting system in the entrance is also nonfunctional.[1]

Visitors who follow the current through the grotto's entrance will eventually wash up on a beach, contained within a narrow room with smooth tile walls, and covered with various flotsam and jetsam. On this beach, there are three floor lamps, each with a letter on their shades to spell "V.F.D." The third lamp, displaying the letter "D," has burnt out.[1] All travelers are advised to avoid this beach, because under its sands lay the deadly Medusoid Mycelium.

The Baudelaires in the Gorgonian Grotto.

The Baudelaires in the Gorgonian Grotto. 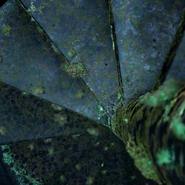