Gustav Sebald was a film director who hid secret codes in his movies, a member of V.F.D., and the likely creator of the Sebald Code.[1] He was at one point Montgomery Montgomery's assistant before his death.

Gustav had a sister, Sally Sebald, who was at some point recruited into V.F.D..[1] At some point during training or apprenticeship, he was on board a submarine with Captain Widdershins, and was a fan of caviar.[2]

He (or a member of his family) invented the Sebald Code, used widely by VFD members in their correspondence.[1]

Gustav became a filmmaker, hiding secret messages in his movies intended for V.F.D. volunteers. His films tended to be panned by non-V.F.D. critics who did not know they were intended to be messages instead of art. Lena Pukalie, who in her book on film discussion, mentions a suspicion about a coded message in the script, was a V.F.D. Fire-Starter.

Because messages were hidden in the films, Gustav was a very particular director; if even one word of his script was changed, a V.F.D. agent in the cinema audience could receive the wrong message.[1]

At some point, Sebald became assistant to Monty Montgomery. Monty described him as his "top assistant", and he was the only other person before the Baudelaires to see the Incredibly Deadly Viper following Monty's discovery of it.[3]

Gustav created Zombies in the Snow in order to convey a message to Monty. The message was, as follows:

As implied by this message, Gustav discovered a survivor of the fire- possibly the Baudelaire Fire, as he instructed Monty to bring three children with him, and Monty was to gain custody of the Baudelaire children. It also contained a hidden warning that Stephano was an enemy. (This is interesting, as it implies Monty hired Stephano before Gustav died.)

Gustav built a specific snowman just for the film, in order to hide the survivor. He had to use ceramic deer instead of real ones, due to budget problems. He also may have been investigating the Quagmire triplets, as a photo Sally did not recognize, of three siblings "of about the same age" was found in the file of the film. One child was marked with a question mark, and the other two with Sent to Prufrock Preparatory School, which fit the descriptions of the Quagmires.

It is revealed that Monty did not know the Sebald Code and therefore did not receive Gustav's message. The snowman remained standing for several days after the filming, until Gustav realized his message had not been received.

He made an appointment with Lemony Snicket to meet at the Swarthy Swamp, where Snicket was to return pages he was given from the script of Zombies in the Snow.[1] However, Gustav was found out by Count Olaf, who believed him to be collecting wildflowers. Olaf drowned him, and forged a note to Monty claiming he'd resigned.[3] Snicket waited roughly thirty-eight hours before realizing Gustav was not coming.

Following his death, his sister, Sally, managed his estate and papers.[1]

He was briefly seen having been strapped to the front of a train by Count Olaf. His death is not mentioned.

At the Masked Ball years before A Series of Unfortunate Events, he is hypnotized into being Georgina Orwell's date. Larry Your-Waiter confiscates a message from him. He also made an instructional video with other members of VFD, in which he modeled several outfits in the disguise kit.[4]

He is said to have developed the codebreaking spyglass, in order to send messages through films that were so terrible that only the intended recipients would watch. He worked with the drama club of a local prep school to create his movies.[5]

After the Baudelaire fire, he meets Jacquelyn Scieszka in a tunnel, asking why the Baudelaire children had not been sent to him and Monty Montgomery; upon finding out that Count Olaf is responsible, he joins Jacquelyn to apprehend him.

They both attend The Marvelous Marriage and express disgust at the writing. Upon it being revealed that the play is a ploy so that Olaf can marry Violet Baudelaire, Gustav and Jacquelyn prepare to attack him with their spyglasses, before Violet reveals that she did not sign in her own hand and therefore is not married. After Klaus Baudelaire and Justice Strauss agree with her, Jacquelyn and Gustav reveal to Poe that the children are to go to Monty's.[6]

Gustav and Jacquelyn filmed Zombies in the Snow, in order to send a message to Monty to take the children to Peru, which Monty deciphered with his spyglass.[7]

Jacquelyn contacts him to ask about the Baudelaires, while he is standing beside a large pond. While he is speaking, Count Olaf shoots him with a poison dart. He says, "The World is Quiet Here", before plummeting backward into the water, to his death.[6] The murder was performed so Count Olaf could replace him as Monty's new assistant. Monty is later left "an unexpected" letter of resignation.[7]

As described by Sally Sebald:[1]

In the Netflix canon, he is said to have made:[5]

Gustav in the film strapped to the front of a train. 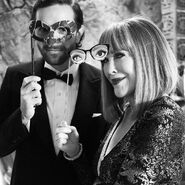 Gustav Sebald and Georgina Orwell at a V.F.D. party before the series. 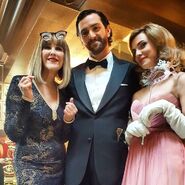 Georgina, Gustav and Jacquelyn at a V.F.D. party held before the series.

Gustav in the TV series, portrayed by Luke Camilleri.

Gustav before his death.

Gustav portraying Young Rölf in Zombies and the Snow. 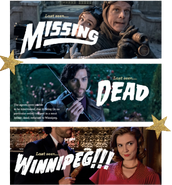