Hal is a man who worked as the record keeper for the Heimlich Hospital's Library of Records, before being recruited into V.F.D..

Hal began working at the Heimlich Hospital in the Library of Records multiple years before its destruction, where he organized everything in the room. However, he did not believe in reading the information, only skimming in order to file, as he believed paperwork was the most important part of the hospital.

He kept a small bowl of fruit in the antechamber of the library, where their intercom was also kept. He also despised The Daily Punctilio, knowing that all of their stories were complete lies.

Hal was in charge of filing the Snicket File, in which he saw information pertaining to the Baudelaire children.

At some point, he requests to Babs that he receive assistants due to his failing eyesight. Around the same time, he lost the keys to the filing cabinets.[1]

Hal welcomes Violet, Klaus and Sunny Baudelaire, who have been sent as his new assistants. He introduces them to the library, and then positions the children in their occupations- Violet and Klaus to skim and file information, and Sunny to use her sharp teeth to open filing cabinets. He mentions remembering something about the children in the Snicket File, which piques their interest.

The following day, Hal is working in the library when the Baudelaires arrive and begin to work. He is noted to have filed away paintings on sewing machines, and biographies of famous Finnish fishermen. When the children take a fruit break, Hal takes a plum upon joining them and informing them that information is only released from the library for very important occasions. At that, Mattathias, a new Head of Human Resources, announces over the intercom that he will be inspecting every room. Hal disapproves, as the hospital still needs construction, but leaves the children to their fruit.

At the end of the day, Violet swaps Hal's keys for her hair ribbon with paper clips attached, in order for the children to steal the Snicket File, though they hope to apologize to him later.

The next morning, Hal discovers the destroyed Library of Records, which has been set on fire. He storms into the Operating Theatre, where the children have been revealed; however, he believes the lie that they were the ones to set the fire. Hal grabs the gurney that Klaus and Sunny are using to push an unconscious Violet, hoping to stop their escape. Sunny then apologizes to him, before biting his hands to make him let go.

Between The Hostile Hospital and The Penultimate Peril

Hal survives the Heimlich Hospital Fire, however remains in the ruins of the records, having nowhere else to go. Kit Snicket finds him in a distraught state, and gives him shelter at the Hotel Denouement as well as a job as a researcher. Hal requests that he be stationed as a cook in Room 954, though Dewey Denouement remarks that he is not good at preparing Indian food.

Dewey Denouement: She's been using her Vision Furthering Device to watch the skies, and I'm afraid she reports that we will all be eating crow.
Hal: I'm sorry to hear that. Crow is a tough bird to cook, because the meat is very muscular from all the carrying that crows do.
Dewey Denouement: It is a shame. If only there was something that could make the dish a little sweeter. I've heard that certain mushrooms are available.
Hal: Sugar would be better than mushrooms.
Dewey Denouement: According to our calculations, the sugar will be laundered sometime after nightfall.
—The Penultimate Peril

Hal is working in Room 954 in the days before the trial is scheduled, and notes that he has to send lettuce up to the roof, likely for Esmé Squalor's lettuce bikini. He serves Vice Principal Nero, Mrs. Bass and Mr. Remora as a waiter, and attempts to give them a codephrase, one none of them recognize. He attempts to infodump about the culinary history of India, but is interrupted by the strange orders of the teachers.

He returns to the kitchen, where he is followed by Sunny Baudelaire. Hal meets with Dewey, who informs him of the arrival of Justice Strauss and hints to him that V.F.D. Crows should be arriving. He also uses codewords to warn him that the Medusoid Mycelium may be coming, and that the Sugar Bowl would arrive sometime after nightfall. The two men then notice Sunny, requesting her identity, and when she responds she is a concierge, Hal and Dewey hand her the Vernacularly Fastened Device to attach to the laundry room, Room 025, and hinting that something falling from the sky may land there.

After the death of Dewey Denouement, Hal announces that he believes in the Baudelaires' innocence. He submits paperwork at the following day's trial, and when it erupts in uproar, Hal is the first to declare the children innocent.

It is unknown if he survived the subsequent Hotel Denouement Fire.

Hal's role is the same in the Netflix series. After the Library of Records is destroyed by Esmé Squalor, he gets depressed and works at the front of the hospital. Hal meets Arthur Poe and has him fill out some paperwork to get himself checked for hay fever. After Klaus' identity of Dr. Faustus is exposed, Hal enters the operation room stating that he feels that the Baudelaires deceived him. When Count Olaf in his alias of Mattathias Medicalschool states over the intercom that the Baudelaires started a fire in the Library of Records, Hal is among those who assist the Henchperson of Indeterminate Gender in chasing them. Before the fire at Heimlich Hospital can get worse, Hal walks by a narrating Lemony Snicket in a depressed state.

He is portrayed by David Alan Grier.

He is described in the books as being the oldest man the Baudelaire children have ever seen. He has poor eyesight and a tiny pair of glasses, with each lens "scarcely bigger than a green pea". Perhaps due to the very small size, the glasses do not help Hal's eyesight. He seems to be short, as his head brushes the top of the Library that is described as "not tall."

When he goes to go work at the Hotel Denouement, he wears a turban.

In the Netflix series, he is dark-skinned. Instead of tiny glasses, he has regular-sized glasses with a couple small magnifying glasses attached to each side.

Hal in the Russian version of The Penultimate Peril.

Hal showing the Baudelaires the Library of Records. 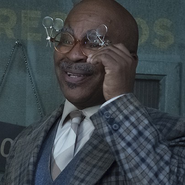