Harvey Mitchum is one of the last two police officers in Stain'd-by-the-Sea and a reoccuring character throughout All the Wrong Questions.

Harvey lived in Stain'd-by-the-Sea with his wife, Mimi Mitchum, with whom he constantly argues. They have a son, Stew, whom they adore. The couple are the only police officers left in town, and due to budget cuts, their police car is made of a  station wagon with a flashlight taped onto its roof and their son making a siren noise.

He believes that the bell that rings to signal the residents of Stain'd-by-the-Sea to put on their masks warns of the Bombinating Beast.

Harvey hung up the sign outside of the police office himself.[1]

After a streetlight is vandalized, Harvey and Mimi go to interrogate the newcomers to town- S. Theodora Markson and her apprentice, Lemony Snicket. However, once they meet, Harvey refers to Mimi as his wife, to which she argues with him that they shouldn't refer to each other as a couple at work. They finally get to the point, and Snicket claims that him and his mentor are in town on business and to take in the sights of the town. They ask him about the streetlight, and he responds that he has an alibi, as he was in the library. He mentions Stew, and the Officers get angry at the impllication their son could be the culprit, as they see him as an angel. He and Mimi get into another argument, and Snicket and Theodora leave.

That night, the Officers receive a call claiming there is a burglary happening in the Sallis Mansion, including the theft of a statue in the shape of the Bombinating Beast. They arrive and catch Theodora climbing into a window on a hauser, who won't explain what she's doing. However, she doesn't have any stolen items on her, so they release her. They find Snicket at Handkerchief Heights, where he claims to be visiting Ellington Feint and helping her mail packages. They search the house for the statue, finding nothing, and then drive the two children back into town to mail their packages.

Two days later, Theodora contacts the Mitchums, as her apprentice did not return home the night before. They find him and Ellington with the stolen item, which is to be returned to the Mallahans. The officers drive them to the lighthouse, bragging the whole way about their darling son.

Harvey and his wife are called to Partial Foods to investigate a theft; Polly Partial describes a young boy with a bowlcut who stole two honeydew melons. When they leave the store, they see Stew talking to Snicket. After he sasses them, they arrest him for the theft and take him to the station. Harvey stays at the station with Snicket, Stew and Moxie Mallahan, where they set up a lineup with Snicket marked with 1, Stew marked with B, and a file cabinet marked with a star.

Mimi returns with Polly, who identifies Stew as the thief, which angers the Officers. They argue about who will drive her back until she agrees to wak home herself. Snicket then informs them that Polly was the only witness to Cleo Knight supposedly running away, and as she is unreliable, Cleo may be in danger. He suggests that they interrogate Dr. Flammarion, the Knight family apothecary.

When the Mitchums reach the Knight house, however, they find that the family has moved away. They meet up with Theodora and find Snicket and Ellingon at Black Cat Coffee. When Ellington confesses to pretending to be Cleo, Harvey and Mimi arrest her for fraud and hold her temporarily in the station's jail.  The police are called about trespassers at the Colophon Clinic, and when they arrive, they find Cleo Knight, as well as Snicket, Jake Hix, Pip and Squeak Bellerophon and Moxie, having managed to hold back Cleo's former captors, Flammarion and Nurse Dander. They argue about Harvey's rough driving until Nurse Dander asks them to please take them to jail.

On a Friday, Harvey and Mimi are called to one of the oldest neighborhoods in Stain'd-by-the-Sea, to investigate a broken window at Boards, owned by Bob Old. They find a note from a group that calls themselves the Big Bad Brick Gang; the note says that they are an anonymous group of vandals and other malcontents who strike with clever strategy and bricks, and that nobody will ever catch them. Both Officers believe the note, and they argue about the ending of a book until Snicket arrives. They explain the situation to him, and when he says the shouldn't believe everything they read, they begin arguing about each others' reading comprehension.

The next day, the officers investigate another vandalism from the Big Bad Brick Gang, this time at Swords, owned by Muriel Distinguished; they take Stew along with them. This time, the note says that they will never find out what makes the Big Bad Brick Gang choose a place to strike, and also that the officers can call them the BBBG if they want. Snicket guesses that they're attacking stores with rhyming names and suggest they investigate there.

On the next day, the Officers are called to a third place the BBBG have hit, this tiime Chrysanthemums, a store run by Delphinium Smith. They once again find a letter saying that they are helpless to bring the BBBG to justice, and then they argue about another book untli Snicket arrives. After talking with Delphinium and her daughter, Florence, he tells them that the BBBG is really two people, who will not strike again and hopefully clean up the windows and explain their behavior. However, he does not reveal their identities.

Mimi and Harvey stayed up late watching two movies- one about zombies in the winter and one about giant bugs- and thus are tired the next morning when Polly Partial reports a blueberry pie theft. They arrest three suspects who match her description, but are too tired to figure out which one of them did it.

Harvey runs into Snicket outside the office, who volunteers to help them solve the case. Harvey argues with Mimi until she explains everything to Snicket, and they continue to argue until he solves it.

Stew convinces his parents to let him stop working as a police siren and transfer him to Wade Academy, claiming to want a top-drawer education.

Harvey and Mimi are called to the scene of an arson; at 421 Ballpoint Avenue, the home of a new resident, Harold Limetta, has been burned down, killing his collection of moths. They argue about a movie they'd seen until Snicket and Theodora arrive, also looking for Harold Limetta. They say that they are going to ask for him at Birnbaum's Sheep Barn, where he gets wool to feed his moths, only for Theodora to inform them that the sheep barn has also burned down. He and Mimi tell the two to keep out of the whole business, and then they argue until the pair leaves.

Later, Theodora and Sharon Haines decide that Dashiell Qwerty is the arsonist and send Mimi and Harvey to arrest him. They catch up to him at Black Cat Coffee and bicker as they load him into the car.

A while later, the officers are warned by Theodora that a fire is going to begin, and soon they hear the fire alarm at the library next door. They enter to find the sprinklers going off, and see Stew, Snicket and Ellington standing inside. Stew claims that Ellington destroyed the library, and so Mimi and Harvey arrest her.

Harvey and Mimi board the train with their son, Stew, to take Qwerty and Ellington into town to await trial. While there, Stew reveals his true colors by murdering Qwerty. Ellington trades her silence on the identity of the murderer for her freedom, and in order to protect their son, they agree. They awkwardly allow Stew to do what he wants, including framing Theodora for the crime and threatening three librarians into pretending to be witnesses.

After the Bombinating Beast attacks the train and kills Hangfire, the Officers Mitchum arrest Ellington for the death of Qwerty in order to avoid arresting Stew. They release Theodora and warn her to never return to Stain'd-by-the-Sea, to which Snicket warns them that with the fall of the Inhumane Society, Stew will be left alone.

Harvey is described as looking a lot like his wife. He has a pear-shaped body, with short, thick legs and grumpy-looking arms, and a small head.[1] He is described as having hair like "a field of greasy, graying grass."[2]

Harvey and Mimi see a fire. 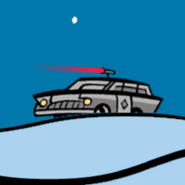 Police car on the Official Site.