A mile from the Village of Fowl Devotees[1]

The barn is described as enormous, though it is skinnier than the Nevermore Tree, and positioned beside Hector's house. Hector uses the barn to store forbidden materials, creating his own inventing studio and library. As such, the barn is kept locked to prevent the Council of Elders from investigating.

The library is very massive, but comfortable, with sturdy tables and cushioned chairs. The bookshelves are described as of varying heights, including those tall enough to require a ladder, and short enough one has to crawl to reach the books. The books are of varying weights and lengths, though many of them look dull.

The inventing studio is well-equipped, noted to have plenty of pliers, glue and wire. Most important to the studio is Hector's work on his invention, the Self-Sustaining Hot Air Mobile Home, a "marvelous contraption." 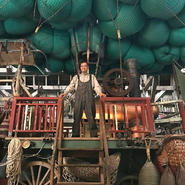