Burned down by Count Olaf

Klaus Baudelaire: I've never liked hospitals.
Violet Baudelaire: Well, technically it's half of a hospital.
—"The Hostile Hospital: Part One"

Heimlich Hospital is the main setting in The Hostile Hospital and served as the Baudelaire orphans' temporary home and place of employment while they were on-the-run as fugitives. It is located in the Hinterlands, outside the City.

In keeping with the comic nature of the series, the hospital plays on real fears of inadequate care and medical malpractice, and is known to suffer from budget cutbacks[1] [2], and medicine is extremely experimental and most likely outdated; for example, doctors assume that chopping off someone's head can cure mental disease.

One half of the building was finished and the other remained unfinished. It is unknown if this is simply because the hospital is in development, or if it ran out of funding during construction. The strange names of medical wards in the hospital demonstrate that it is ridiculously disorganized.

The finished half of Heimlich Hospital was a beautiful building that contained every commodity an average hospital contains. It was where many of the licensed doctors, nurses, surgeons, and other staff employed at the hospital performed their duties.

The supply closets in the hospital are stocked with alphabet soup, rubber bands, and doctors' coats, in addition to a sink. In The Hostile Hospital, Klaus and Sunny hide in one of the closets and use the lab coats to disguise themselves as doctors. Later, the Baudelaire siblings hide in another supply closet from the person who looks like neither a man or a woman when the fire had spread throughout the building.

Some wards are seen only in the TV series:

The Unfinished Half of Heimlich Hospital is nothing more than a wooden frame (metallic in the TV series) with some construction materials here and there. During the events of The Hostile Hospital, the Baudelaire children slept in this portion of the hospital.

The Library of Records was located in the basement. There, it archived information found all over the area or possibly the entire region. The library had two rooms that contained a small antechamber with a bowl of fruit preceding the large filing room, which itself was filled with rows upon rows of locked filing cabinets. The ceiling was low and each cabinet aisle was only big enough for a single visitor to walk single file. Records were deposited through a chute into the room before they were then filed away by the recordkeeper, Hal.

Later on, while the Baudelaire orphans were escaping the hospital, the library was set on fire by Esmé Squalor and Count Olaf, eventually burning the entire building to the ground. Afterward, Dewey Denouement's partner (Kit Snicket) went to gather the remnants of the records for the Hotel Denouement and discovered Hal. She eventually brought him to the hotel where he would later testify that the Baudelaires were not guilty of Dewey's murder.

While it was never stated in the The Hostile Hospital, in Lemony Snicket's autobiography, Kit Snicket mentions that both the Library of Records and Dr. Montgomery's house were secured places that contained crucial information. This could mean that the hospital was originally founded by V.F.D., but for reasons unknown, left half-finished; or it is possible that a volunteer owned the hospital and added the library to the facility. Another theory is that a volunteer had hidden something in the hospital and didn't want anyone to find it. To prevent that scenario from happening easily, they placed the object in a room or area where most people would not think to look.

In the TV series, the Sugar Bowl was found there and later retrieved by Kit while she had Olivia Caliban play the role of Madame Lulu back at Caligari Carnival.

The Baudelaires discovered only a single page of the Snicket File in the Library of Records where they found out that someone survived a fire. The file did not explicitly state who survived and what specific fire had taken place, though the three siblings had long speculated that one of their parents were still alive.

Heimlich Hospital is a reference to Henry Heimlich. He was an American physician and medical researcher best known for his invention of the Heimlich Maneuver, a method performed to dislodge an object from one's throat to prevent death from choking. 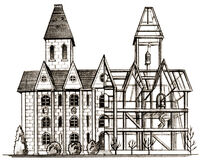 Esmé Squalor in the Library of Records.

Violet in the Library of Records.

Observers in the Operating Theater.

Violet in the Library of Records.

White-faced women in a hallway.

Olaf with his troupe.