Lemony Snicket Wiki
Register
Don't have an account?
Sign In
Advertisement
in: Pages with inline Wikipedia links, ATWQ, Businesses and institutions,
and 11 more

Who Could That Be at This Hour?
The Hemlock Tearoom and Stationery Shop is a location in All the Wrong Questions, located in the Stationery District in the City.

It is in the Stationary District in The City, across from the train station, so people waiting for a train may have tea there.[1]

The tearoom has floors that feel dirty even when they are clean. The food is too awful to eat, especially the eggs. However, the tea is tolerable. The tea steams quite a lot, usually filling the room. The teacups have "HEMLOCK" written across the side.

The Hemlock also sells paper and pens that are damaged and useless.

The bathroom is down a small hallway from the tearoom. There is a small, square window over ten feet up, in a corner on the wall, with a simple latch that is easy to open.[1]

After his graduation into apprenticeship, Lemony Snicket had tea in the shop with two V.F.D. Chaperones- Gifford and Ghede, pretending to be his parents in an effort to drug and kidnap him. After S. Theodora Markson passed him a note, he snuck out the bathroom window with a ladder he'd hidden there earlier.[1]

Its involvement with VFD is unknown. Lemony's graduation dinner was held there by Gifford and Ghede, and Theodora seems to have paid off the waitress to help him escape.[1]

There may have been a small reference to the Hemlock Tearoom when Kit Snicket is telling Violet, Klaus, and Sunny Baudelaire about the kinds of places VFD members could safely gather before The Schism. "Bookstores and banks, restaurants and stationery stores, cafés and laundromats..."[2] 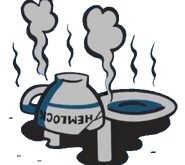