Count Olaf lighting a fire in the Laundry Room after Sunny Baudelaire suggested to.

The Hotel Denouement Fire was an act of arson that occurred in Chapter 13 of The Penultimate Peril to warn the Fire-Fighting side of V.F.D. not to meet at the hotel.

The Hotel Denouement Fire happens on a Wednesday afternoon when Sunny suggests to burn down the hotel as a way to keep its occupants from getting infected with the Medusoid Mycelium. It is used by the Baudelaire children in order to signal to Kit Snicket and other volunteers who will be "watching the skies" that the Hotel Denouement is no longer safe.

Count Olaf started the fire in the Laundry Room of the hotel, using the dirty laundry sheets and Jerome Squalor's book Odious Lusting After Finance as kindling.

Count Olaf, his hostage Justice Strauss, and the Baudelaires are in the Laundry room. Klaus helps unlock the door, Violet plans a way to escape and Sunny says "burn down the hotel." Olaf takes Odious Lusting After Finance, pours chemicals onto the sheets, and sets them on fire.

It is unclear who survived the fire, although Justice Strauss and the Trolleyman are confirmed to have survived. 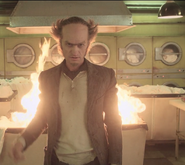