The destruction of Josephine Anwhistle's House

Klaus Baudelaire: A hurricane on a lake? I thought hurricanes only occurred near the ocean.
Taxi Driver: A body of water as big as Lake Lachrymose can have anything occur on it.
—Klaus and Ishmael, "The Wide Window: Part One"

Hurricane Herman was a violent storm that passed over Lake Lachrymose during the time the Baudelaire orphans had stayed with Josephine Anwhistle. The storm, though unusually short-lived for a hurricane, nonetheless threatened the lives of the Baudelaires in particular, who were in Aunt Josephine's house when one of the stilts holding up the house was struck by lightning, causing it to fall into the lake below.

Hurricane Herman formed during the off-season of Lake Lachrymose; though hurricanes normally occur near or above the ocean, a body of water as enormous as the lake "can have anything occur on it," according to a taxi driver that resides in the coastal village.

The Hurricane's arrival was predicted at least a week beforehand, and as such several businesses closed for the storm, such as the Fickle Ferry, though it seems that others such as The Anxious Clown remained open.

The storm was notoriously famous for knocking down Josephine Anwhistle's House from the cliff upon which it stood, endangering the lives of the Baudelaire children. They took to the lake towards the end of the hurricane, and though it was dangerous to set sail during inclement weather, they managed to reach Curdled Cave by the time the hurricane finally subsided.[1]

In the film adaptation, the severity of the damage caused by Hurricane Herman is given more light. For example, it completely obliterates most of the house, leaving what little was left of it to fall into the lake just after the Baudelaire orphans were able to escape. Shortly before, the cyclone managed to set off what is best described as a series of unfortunate events, all of which were exceedingly dangerous in their own right. 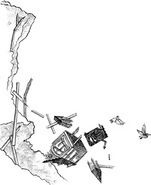