The smuggling of Duncan and Isadora Quagmire out of the City.

The In Auction is an organized event that was held in Veblen Hall in The City. There, only items that are in (in style or trendy, in other words) are auctioned off to the highest bidder. According to Esmé, the profits from the events were intended to go to a "good cause"; herself.

Esmé Squalor was in charge of coordinating the event along with Gunther, who was really Count Olaf in disguise. The Quagmire triplets,Duncan and Isadora, were hidden in an item that was sold in Lot 48 and were smuggled out shortly after the auction concluded. Over the course of The Ersatz Elevator, the former and Gunther planned out the auction together while Jerome and the Baudelaire children went out to eat at Café Salmonella and it eventually takes place at the climax of the installment. The auction ended in disaster when the Baudelaire children had bid on an item they assumed the Quagmires were hidden in because it had the initials, V.F.D., labelled on the packaging. Sadly, their bold attempt ended in melancholic disappointment when it turned that there were doilies hidden inside instead. This misfortune coupled with the revelation that the Baudelaires had no money to pay for their bid instigated an outrage that was followed by Gunther's cover being blown, but he took advantage of the scattered doilies to evade capture once again. 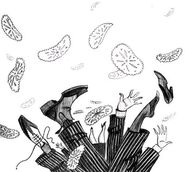