The Incredibly Deadly Viper, also known as Ink and Inky, is a snake discovered by famed herpetologist, Dr. Montgomery Montgomery.[1]

According to the video game adaptation, he discovered the viper in Tasmania. However, this may not apply to other media tied to the series so it remains a speculation.

The appearance of the Incredibly Deadly Viper is known - he is as "black as a coal mine and as thick as a sewer pipe" with "bright green eyes" - but the order in which Ink's past unfolds is unknown. At one point in his life, Ink met Kit Snicket, who called him Ink, Ishmael, Beatrice and Bertrand Baudelaire and spent some time on The Island with the latter two, who named him Inky and trained him to lasso sheep. During his time on the island, Ink learned about the apples with horseradish that protected against the Medusoid Mycelium.

Whether Ink left with the island before the Baudelaire couple or after them is unknown, though it is stated that he sailed off the Island with two women.[2] Whatever the circumstances of his departure from The Island, some time between fourteen and fifteen years before the birth of Violet, Ink was back on habitable land.

After his arrival back on the mainland, Ink was "discovered" by Doctor Monty Montgomery, who took him to the Reptile Room of his house - whether Monty actually discovered Ink or whether Ink let himself be found by Monty is unknown.

Between his discovery and the arrival of Violet, Klaus and Sunny Baudelaire, Monty discovered that Ink was "one of the least dangerous and most friendly creatures in the animal kingdom" and named him "The Incredibly Deadly Viper" as a misnomer because he was intending to play a prank on the Herpetological Society, where he was planning to unveil the snake, presumably after his return from Peru with the Baudelaires, which would be exactly a month after their arrival.

At the time of the Baudelaire's arrival at Monty's house, Ink was his "latest discovery" and he formed a close bond with Sunny; the two of them would bite things together. Together, after Monty's death, they managed to distract the adults, by faking that Ink had bitten Sunny, while Violet searched the suitcase of Stephano. With Stephano revealed as Count Olaf and Monty's murderer, Ink was packed up with the rest of Monty's collection and taken away by Bruce.

In Between The Reptile Room and The End

Somehow, Ink was smuggled away from Bruce by the owners of The S. S. Prospero.[3]

After having either escaped or been released, Ink managed to locate Kit again and the two of them, Kit pregnant and injured, washed up on Kit's Vaporetto of Favorite Detritus, leading to their return to the island and their reunion with the Baudelaires.[2]

Friday Caliban is the first to find the snake, and hides it from the other islanders, before revealing it to the Baudelaires, who assure her it is not dangerous. When the islanders arrive, Friday claims it is friendly, but Ishmael suggests that they leave it behind.

The Baudelaires fail to convince the poisoned islanders, who are escaping on an outrigger, to eat the apples, as Ishmael is refusing to let them; they eventually give up on the colonists, and try (and fail) to give an apple to Kit.

Ink disappears during this time, and Lemony Snicket heavily implies that it swam to the outrigger, using its size to "escape the watchful eye of the outrigger's facilitator," to bring the islanders the hybrid apple(s).

Whether Ink succeeded in his quest is unknown, though presumably Ink managed to make his way back to shore at a point after this. Snicket says that his research into the reptile's story is incomplete, and he believes that Ink "slithered from one place to the next, sometimes taking shelter from the treachery of the world and sometimes committing treacherous acts of its own."

The Incredibly Deadly Viper has an incredibly minor role in the film; it unlocks its cage and springs out, being caught by Monty but frightening Sunny, though Monty assures the children that it is friendly.

When Olaf accuses the Incredibly Deadly Viper of murdering Monty, Sunny tracks it down in the room and plays with it, proving that it is harmless. Olaf and his henchperson flee, leaving the Baudelaires, Arthur Poe and the Constable behind.

It is unknown what happened to the snake after this.

Like in the book, it playfully attacks Sunny and befriends her quickly;[4] she says that they "bonded over biting." Later, Olaf accuses it of murdering Monty and releases it from its cage to back up his story. It escapes outside, where it encounters Sunny.

Sunny reveals its harmless nature by playing with it, screaming only to attract attention. When the Herpetological Society arrives to take the reptiles, Sunny spots the Incredibly Deadly Viper escaping into the hedges.[5]

Its journey to the island and past before The Reptile Room, unlike the books, is not revealed; it appears as the Baudelaires are dying and gives Sunny a hybrid apple, before escaping to bring an apple to the outrigger.[6] 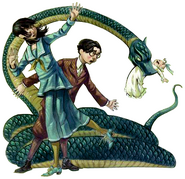 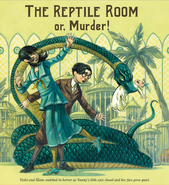 Ink in the Russian illustrations.

Ink loose in the Reptile Room.

On the Reptile Room alternate cover.

Picked up by Monty.

"It's the Incredibly Deadly Viper!"

Ink gives the Baudelaires an apple.

Ink delivering the apple hybrid to the islanders.