When Colonel Colophon's statue was built.[1]

The Inhumane Society is an organization in the town Stain'd-by-the-Sea.

It was formed during a fierce argument over whether or not the citizens of the town should build a statue commending Colonel Colophon's effort in the war. A few citizens started to get angry that no one had thought what would happen to the Farnsworth Pulpeater Moths, which lived in the tree that was to be uprooted for the statue, while others believed that they shouldn't commemorate a controversial war with a statue.

During the unveiling of the statue, which some members of the Inhumane Society attended, the statue was blown up, which the society was blamed for. The explosion injured Colonel Colophon permanently.

Armstrong Feint, under the disguise of Hangfire, led the organization to try to destroy the town. Ignatius Knight's draining of the sea led to the death of many species of fish and the flooding of Killdeer Fields; it also ended up creating the Clusterous Forest, which led to the death of several birds.

Hangfire became obsessed with recreating the Bombinating Beast, though his intentions with it are unknown; presumably he was hoping to use it to destroy Stain'd-by-the-Sea. He managed to create hybrid specimens through unknown means (though Dashiell Qwerty expressed that all could be explained with Caviar: Salty Jewel of the Tasty Sea), though he still needed to be able to control the future beasts.[2]

After failing to acquire the statue of the beast from the Mallahans- which was the only thing that could control the creature- the Inhumane Society entered the town. They spread misinformation about the townspeople needing to wear masks whenever the bell on Offshore Island rung,[4] and began ringing it whenever they needed to sneak around in masks. They presumably threatened several adults into leaving; Hangfire claims Ms. Mallahan, who left the town, due to being "unable to face the truth."[2]

Hangfire threatened Dame Sally Murphy into calling members of VFD in to help her steal the statue, hoping to frame them and take it, but this failed when Lemony Snicket escaped with the statue, which was stolen by Ellington Feint, Armstrong's daughter, who he was manipulating while pretending to be her father's captor.[4]

Armstrong planned to kidnap children to feed the beasts, and he took over Colophon Clinic to use as a headquarters, attaching shackles to the beds to hold the kids and killing Colonel Colophon; they also took residence in an abandoned aquarium, repurposing the tanks to raise the beasts in a tadpole stage.

Dr. Flammarion and Nurse Dander assisted in the kidnapping of Cleo Knight to prevent her from saving the town with her invisible ink formula, planning to use it for themselves. Though they were arrested and sent to the city for trial, several members of the society remained in town; they had managed to recruit Stew Mitchum, the son of the police officers.[1]

As the release of Cleo Knight meant the society had to abandon Colophon Clinic, they relocated to the abandoned Wade Academy. Sharon Haines and her son, Kellar, were threatened into doing the society's bidding due to Hangfire's capture of Kellar's sister Lizzie. Pretending to be a member of the Department of Education , Sharon convinced S. Theodora Markson that the librarian threatening the society's work, Dashiell Qwerty, was an arsonist, before Hangfire burnt down the town's only school, forcing the students to relocate to Wade Academy. At this time, the Bombinating Beast was in a young stage and kept in the Wade Academy fire pond.

At the academy, all the students were drugged with laudanum, leaving them sleepy and compliant. The only students who escaped the effects were Stew Mitchum, who patrolled the halls, and Ellington Feint, who had a supply of coffee. The society kidnapped Moxie Mallahan, Jake Hix, Cleo Knight, and Kellar Haines to bring to the school; however, Cleo found some "bark" (shedded Bombinating Beast skin) that, when sucked on, reversed the effects. They escaped with the help of Lemony Snicket, who managed to prevent Stew from burning down the Library.[3]

Hangfire orchestrated for Stew to murder Dashiell Qwerty on the train out of town, and made a complicated plan to take the Bombinating Beast statue from Ellington. Once he did, however, Snicket stole the statue and summoned the beast, which was finally grown enough to attack. Snicket fed Hangfire to the beast before leaving with the statue; without its leader, the society was doomed to fall apart.[2] 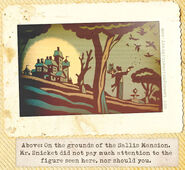 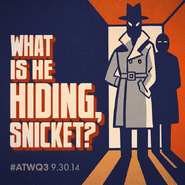