By Ingrid Knight some years before All the Wrong Questions

When Did You See Her Last?
Ink Inc. was the largest and most prosperous business in Stain'd-by-the-Sea, dominating the Ink Industry and supporting the town until its decline.

Ink Inc. was founded by Ingrid Nummet Knight and her business partner, Colonel Colophon. Ingrid experimented with ink from several different creatures before settling on extracting ink from octopi. The octopi of Stain'd-by-the-Sea produced famously dark ink, which made the company and the Knight family very rich.

After Ingrid's death and Colophon's injuries in an explosion, the company was left to Ingrid's son, Ignatius. Being neither a genius or a scientist, but a tycoon, Ignatius focused mostly on making money. When the octopi of Stain'd-by-the-Sea started to run out of ink, Ignatius ordered the draining of the sea in order to harvest the last of the inkwells. While this plan was opposed by numerous people, it went underway. The draining turned out to be expensive and disastrous, and economically crippled the town, also creating the Clusterous Forest, a large area of living kelp and seaweed growing where the sea used to be.

While Ignatius' plan did let Ink Inc. access and extract ink from the remaining octupi, this was only delaying the inevitable closing of the company. Eventually, Ignatius and his wife, Doretta, abandoned Stain'd-by-the-Sea.

Meanwhile, the young chemist, Cleo Knight, granddaughter of Ingrid, was working on a formula for invisible ink that she hoped would make Ink Inc. a successful company and Stain'd-by-the-Sea a proper town again.[1]

The Knight family lived in the Ink Inc. building before leaving town. It was a tall, pen-shaped tower with a surprisingly small door and large letters, spelling the name of the company.[1] It is described as the tallest building in town.[2] The doorbell was designed to look like an ink stain.

The inside of the building was very dark and the hallways very narrow. However, the kitchen is bright, due to a large window. Most of the building's decorations are unknown, as the Knights were packed up to leave when Lemony Snicket and his chaperone, S. Theodora Markson visited.

Cleo's room is described as looking brand new, with a shiny bed and dresser stacked with her trophies and a closet of her black-and-white clothing.[1]

Headquarters in the distance.

On the Official Site. 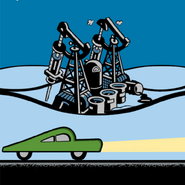 Inkwells on the Official Site.

Ink Inc. sign on Yamgraz Drive.
Add a photo to this gallery

Retrieved from "https://snicket.fandom.com/wiki/Ink_Inc.?oldid=86982"
Community content is available under CC-BY-SA unless otherwise noted.