Unknown, since eating the hybrid apples makes him likely immune to Medusoid Mycelium

Ishmael, who prefers the nickname Ish, is a major character in The End, and also arguably the main antagonist of the novel.

Ishmael is the leader of a cult of sorts who, until The End, have never challenged his ways. Although he always tells the people of the island "I won't force you," it soon becomes apparent to the Baudelaires that his decisions go largely unquestioned and his suggestions are obeyed like orders anyway, due to peer pressure. He also frequently warns them not to "rock the boat."

In the books, it is revealed that he is a volunteer of the mysterious Volunteer Fire Department, also known as V.F.D. In the TV series canon, he is the founder of the organization as well. As such, he has a tattoo of an eye on his ankle. He tells the other castaways on the island that his feet are injured, and keeps them covered in clay to promote this idea as it supposedly has healing properties, but it turns out that he was lying so that he does not have to do much work on the island. In the TV series, he wears boots made of clay and walks around the islanders sometimes, although he apparently has his own sleigh, implying he has told them that he is partially disabled in this version.

Ishmael is a very secretive elderly man who dislikes change and uses the "appeal to tradition" argument, a logical fallacy that supports doing something merely because it's been done for a long time. He does not allow anything to happen on the island that will change the ridiculously arbitrary customs and traditions that he has put in place. For example, Miranda Caliban has learned the backstroke in secrecy, as he claims it is not the customary way to swim.

Ishmael's reluctance for change and new experiences is eventually revealed to have stemmed from his "differences in people cause conflict" mentality, as part of his "safety is more important than free will" opinion. He does not want the islanders to be influenced by anything that comes from the "outside world" beyond the island because he views it as corrupt, treacherous, and dangerous.

Ishmael has a compassionate side, as he has been caring for the islanders and welcomes the Baudelaires into his society, as long as they abide by his rules. He was well-intentioned when he was part of V.F.D. His desire to create a peaceful utopia-like society is undeniable.

Unfortunately, Ishmael also has an rather cruel and selfish side as shown when he willingly endangered the lives of the islanders in order to keep his secrets safe, although Ishmael's goal was to prevent another schism. When Violet called him out for valuing preventing a conflict over preventing their deaths, and also endangering the rest of the world by possibly spreading the fungus to other people, all he replied was, "I guess it depends on how you look at it." He also took a jab at the poor survival skills of the Baudelaire parents as he said farewell to the Baudelaire children before his departure.

The book version of Ishamel is shown to be rather intelligent and philosophical in addition to being more "humanized". Due to the TV series portrayal of Ishmael being forced into an hour, Ishmael comes off as a bit more one-dimensional in this adaptation.

Ishmael was once a member of V.F.D., as well as a chemistry teacher in the City. He regards Count Olaf as his personal enemy, blaming him for the act of arson that destroyed his home, although Olaf later denies this, saying that it wasn't caused by him at all.

He washed up on the island like everyone else,  although there is no detail on what circumstances exactly brought him there. Beatrice and Bertrand Baudelaire were already the facilitators of the island before Ishmael arrived. Since he was previously involved with V.F.D. and the schism, Ishmael wanted life on the island to be as far away from treachery as possible.

Ishmael began to spread rumors and doubt throughout the island that operating so boisterously would eventually endanger the inhabitants. Beatrice and Bertrand referred to Ishmael's actions as "fear-mongering". Due to frequent outbursts of concern from Ishmael, the construction of a passageway to Anwhistle Aquatics was halted. After persuading the castaways on the island to enact more policies to keep themselves safe, and to keep treachery from washing up on the shores, Beatrice's and Bertrand's values were abandoned, and those in favor of their teachings left the island with them.

After Ishmael became the island's facilitator, he made everything on the island simple and pressured the same lifestyle for everyone in order to avoid future schisms. For example, the same three bland dishes were served for breakfast, lunch, and dinner respectively. Furthermore, he did not allow forks because they could be used as weapons. The other islanders remained submissive when Ishmael insisted that they regularly drink fermented coconut milk, an opiate that keeps them from protesting against his customs. He claimed that teaching the islanders how to read is not a good idea, so those born on the island such as Friday Caliban take secret reading lessons with Professor Fletcher. Ishmael convinced the islanders that their island was a safe paradise and a haven from the evil and treacherous that wrought in the outside world. He was also the one who suggested that Miranda Caliban lies to Friday and tell her that her father had died.

He is responsible for the upkeep of the arboretum and the secret library within, as well as all of the detritus that washes up on the coastal shelf, pulled to the arboretum by the sheep he trained to do so. He predicts the weather with a tall periscope, although he tells the islanders that he does this by performing magic. Since he does not allow the Islanders near the arboretum, they were oblivious to the fact that the apples on the giant tree dilute the Medusoid Mycelium. He eats them regularly though, as he fears the fungus might eventually threaten the colonists' way of life. His frequent eating of the hybrid fruit has caused him to be completely immune to the poison.

Ishmael welcomes the Baudelaire orphans with open arms when they arrive on the island. He has a peculiar reaction when he hears their surnames, implying he knew of them or their parents, due to his previous association with V.F.D. He allows the Baudelaires and Kit Snicket to live on the island on the condition that they must abide by his rules, while he had Count Olaf caged.

After the Baudelaires introduce themselves, Friday suggests a toast to them which her mother, Miranda Caliban, agrees to. Ishmael says, "Let's drink a toast to the Baudelaire orphans!" despite them not mentioning their lost parents, foreshadowing he knows more about them than he's letting on. They call a toast with the coconut cordial which everybody carries, but the Baudelaires dislike it. Ishmael repeatedly keeps offering the cordial to them, despite continuously rejecting it because they think it tastes strange. ​​ The islanders become annoyed with Ishmael's rules and begin to form a mutiny against him. One night, two of the islanders, Finn and Erewhon, sneak out to feed the children and ask them a favor. A group of discontented islanders plan to begin their mutiny against Ishmael in the morning, and they ask the Baudelaires to go over to the arboretum where all the contraband items are collected and find or make some weapons to use in the rebellion. Further, the mutineers refuse to help Kit unless the Baudelaires help them in return.

The children agree and set off for the arboretum. There, they discover a well-appointed living area and a well-organized library before they were discovered by Ishmael. They learned that their parents were once the island's facilitators and have made many improvements meant to make life on the island easier and more pleasant, but they were eventually overthrown by Ishmael because he believed that a strictly-enforced simple life (combined with the opiate laced in the coconut cordial) was the best way to avoid conflict. The Baudelaires also find an enormous history of the island, titled A Series of Unfortunate Events, written by many different people that served as previous facilitators, including their parents and Ishmael himself. He also makes references to many other people, including a girl with only one eyebrow and ear (the mother of Isaac and Gregor Anwhistle). Ishmael states that he learned to drink tea as bitter as wormwood, which, non-coincidentally, is what Kit says tea should be like. He also says he had a very important conversation with a waiter in a lakeside town.

The Baudelaires and Ishmael return to the other side of the island, where the mutiny had already started. In the process, Count Olaf returns, still in disguise. After a brief exchange, Ishmael foolishly harpoons him in the stomach with a harpoon gun. The harpoon shatters the helmet containing the Medusoid Mycelium, instantly infecting the island's entire population. The wound has proven to be fatal since it eventually kills Count Olaf. The Baudelaires tried to tell the islanders that the apples will cure the infection, but their pleas were fruitless. The islanders have abandoned the mutiny and boarded their outrigger canoe, ready to set sail to a horseradish factory on Lousy Lane (possibly Opportune Odors Horseradish Factory) which contains horseradish factory which can cure them. Ishmael refuses to allow the apples onboard, though it is clear that he himself has already eaten one as a precaution.

Violet persuades Ishmael to come to the realization that by going to the mainland, he could spread the poison to the rest of humanity, but this does not discourage him from leaving. He then enters an argument with her and her siblings about what their parents would want them to do, causing Ishmael to savagely ask, "What do your parents know about surviving?" It is hinted that one apple was snuck on board by the Incredibly Deadly Viper to tide them over until they reach the horseradish factory on Lousy Lane. What happened to Ishmael and the islanders after their departure otherwise remains unknown.

Several major changes are made to Ishmael's backstory in the Netflix adaptation. Instead of simply being another Volunteer, he is the founder of V.F.D. and was the principal of Prufrock Preparatory School. While he held this post, he recruited bright youngsters (although this seems to contradict Jacques referring to the organization as "ancient" in earlier episodes, it is claimed in Shouldn't You Be in School? that V.F.D. is simply the current iteration of the group). Ishmael also did not banish the Baudelaire parents from the island. Instead, he begged them to stay and keep away from the world's treacheries, yet they have decided to leave anyway.

He also does not pretend to be paralyzed, though he does wear clay boots. He also takes the colonists off the island before the Baudelaires were able to discover the cure, lessening his selfish choice to endanger the world in order to keep his secrets.

He is portrayed by Peter MacNicol in the TV series.

Ishmael in the Russian version.

Ishmael aiming at Count Olaf's stomach in the Russian version. 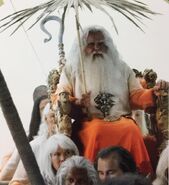 Ishmael with his followers. 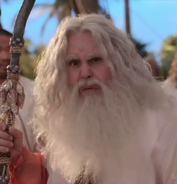 Ishmael telling the Baudelaires the truth.

Ishmael with a harpoon gun, about to harpoon Olaf.