Jackie is a mechanic who lives in Stain'd-by-the-Sea. They appear in File Under: 13 Suspicious Incidents, in the third incident, "Ransom Note."

Jackie lives in Stain'd-by-the-Sea with their grandfather and dog, Lysistrata. While their grandfather works at the bowling alley, Jackie is the main mechanic at Moray Wheels, and they often repaired the Bellerophon Taxi.

Jackie is currenly working on Cleo Knight's Dilemma. When they require help, Pip and Squeak Bellerophon bring Lemony Snicket, who has been solving a lot of mysteries around town. Jackie is a little disappointed that Snicket doesn't look "tough," before explaining that someone kidnapped their watchdog, Lysistrata. A ransom note was left on the Dilemma's windshield, telling the mechanic to bring a complete set of Dugga

Drills to 1300 Blotted Boulevard at midnight if they wanted to see their dog again. Dugga Drills were incredibly valuable, but Jackie would give them up to get their dog back. They can't figure out, though, how a stranger got Lysistrata to go with them, as she'd be barking like crazy, and the dog was known for her loud bark. Pip and Squeak suggest that she could be hidden at the Hairdryer Emporium, as it's very loud, but Jackie reponds that the business closed up a few weeks before.

Snicket suggests that the two of them go to catch the kidnapper red-handed, and Jackie tells him that they can pick him up from the Lost Arms around eleven on their motorcycle, but that Pip and Squeak shouldn't come, as their taxi might attract attention. Jackie's grandfather then arrives, telling the other kids to leave, as they were keeping Jackie from working on the Dilemma. Jackie insists that their grandfather isn't going to take over this job for them, and their grandfather brags about competing in the Margritte Derby, though that was thirty-seven years before, and he came in thirty-seventh place.

At eleven, Jackie picks up Snicket, and he asks why

the kidnapper didn't just steal the drills, and instead stole a loud dog. Jackie drives them to Blotted Boulevard, and Snicket hides while Jackie waits for the kidnapper. They never arrive, and after two hours, Jackie returns, and Snicket suggests they go for a ride, as the kidnapper has had his fun by now, and Lysistrata will be returned shortly.

Lyistrata was kidnapped by Jackie's grandfather, who hid her at the bowling alley, where he frequented. Jackie and Snicket catch him and Lysistrata taking Cleo Knight's Dilemma out for a joyride.

Though they do not appear, Snicket thinks about Jackie as he walks, and he wonders how long they and their grandfather would remain in a town that was going nowhere.

Jackie is not mentioned by name after the events of File Under: 13 Suspicious Incidents. It is possible that they were still in town when the Inhumane Society gathered up the students of Stain'd Secondary School and other children of the town and held them hostage at Wade Academy; Snicket mentions that he recognized some of the children at school "from [his] time in town," which could potentially indicate the children of the thirteen suspicious incidents.[1]

Should they have been there, they would have likely been drugged by Laudanum at Wade Academy and forced to steal honeydew melons for the Inhumane Society,[1] before the students managed to revolt back and turn the society out of the school.[2]

Jackie is described as "about [Lemony's] age." In the illustration, they have short dark hair and a mechanic's uniform with their name on the back.

Jackie: It's nothing personal. I just have some trouble on my hands.
Lemony Snicket: Trouble is like grease. If you have it on you, you'll probably get it on everyone nearby.
Jackie: Pip and Squeak said you're good in a jam.
Lemony Snicket: Depends on the jam.
Jackie: They say you're brave.
Lemony Snicket: Brave is what they call you until it doesn't work. Then they call you beaten. But you don't want to hear my story. You want to tell me yours.
—"Ransom Note"

Jackie: My dog's gone.
Squeak Bellerophon: Not Lysistrata? She's the best watchdog I've ever seen!
Jackie: Loudest bark this side of the Mortmain Mountains, but someone swiped her last night, and let this note for me taped to the Dilemma's windshield.
—"Ransom Note"

Jackie: I've told you a thousand times. You're not going to take over this job for me.
Jackie's Grandfather: You could at least let me deliver it. That car deserves to have a driver like me. After all, I competed in the Magritte Derby.
Jackie: That was thirty-seven years ago, and you cane in thirty-eighth. I'll deliver it myself, thank you.
Jackie's Grandfather: You can't drive a Dilemma. You don't have the reflexes of a professional like me.
Jackie: Your hands shake from too much sugar, and your ears ring constantly from the bowling alley.
Jackie's Grandfather: I like ringing ears!
Lemony Snicket: We'd best get going. See you later, Jackie.
Jackie: Much obliged.
—"Ransom Note"

Jackie in their garage. 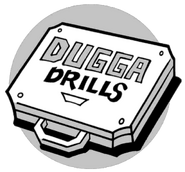