Jill Morrison is an actress who portrayed Mrs. Willums in the Netflix adaptation of A Series of Unfortunate Events.

Jill Morrison knew as a little girl that she wanted to be an actor and when she landed her first role the rest of the world knew why. She has an infectious on screen presence that envelops the audience. Currently, Jill can be seen as June in the heartwarming feature MY DADDY IS IN HEAVEN, which is available now on DVD and ON DEMAND and will be coming soon to the Hallmark Channel.Born in Langley, British Columbia, Jill spent her childhood living in small Canadian towns, always looking for a chance to act. At the age of 13 Jill discovered a theatre group in her community where she began her love affair with theatre. Jill also discovered she had remarkable talent in Improv, a skill that has contributed to her instincts as an actress.

Jill received her B.F.A in classical and contemporary theatre from the University of Windsor. She continued her work in sketch comedy through her university years actively participating in many Improv groups. Jill’s film career began as the memorable ‘She doesn’t even go here’ girl from Tina Fey’s hit movie MEAN GIRLS, a scene that has since grossed 1.5 million hits on YouTube. This was Jill’s first audition and first job. Shortly after completing MEAN GIRLS, Jill booked a lead role in Disney’s feature film CRIMES OF FASHION. A slew of roles followed in numerous blockbuster films including BIG EYES, opposite Academy Award Winner Christoph Waltz, WARCRAFT, DECK THE HALLS, TOOTH FAIRY, FANTASTIC FOUR: RISE OF THE SILVER SURFER and 2012.Jill can be seen in numerous television shows, recurring in City TV’s "Package Deal", A&E’s "The Returned", Showtime’s "The L Word", and USA Network’s "Psych". She’s also guest-starred in ABC’s "Imaginary Mary", The CW’s "Supernatural", "Smallville", "iZombie", and "Emily Owens", Showtimes "Masters of Horror", USA Network’s "The 4400", CBC’s "Intelligence", and SYFY’s, "Aftermath", and "Eureka". Jill has also worked extensively over the years with Hallmark, recurring in the hit drama series "When Calls the Heart", and appearing in numerous Hallmark films including "Signed, Sealed, Delivered: The Road Less Travelled", "The Sweetest Christmas", "Signed, Sealed, Delivered: From the Heart", "Family for Christmas", "Signed, Sealed, Delivered: Truth be Told", and "A Cookie Cutter Christmas".Most recently Jill guest starred in Netflix’s "A Series of Unfortunate Events", alongside one of her mentors Neil Patrick Harris. The role was a dream come true for her, one which also gave her the opportunity to play opposite Neil Patrick Harris’ real life husband David Burtka as his wife. Jill splits her time between Vancouver and Los Angeles.[1] 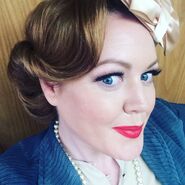 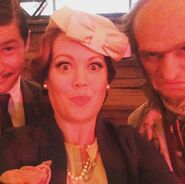 Retrieved from "https://snicket.fandom.com/wiki/Jill_Morrison?oldid=75653"
Community content is available under CC-BY-SA unless otherwise noted.