Lemony Snicket Wiki
Register
Don't have an account?
Sign In
Advertisement
in: Pages with inline Wikipedia links, ATWQ, Association of Associates,
and 8 more

Kellar Haines is first introduced in Shouldn't You Be in School? as a typist in the Stain'd-by-the-Sea Department of Education. He works reluctantly with his mother, Sharon Haines in inducting young children for Hangfire's schemes, but at the same time, he passively tries to warn Lemony Snicket about the false leads that his mother had given to him and his chaperone.

Kellar is smart and resourceful. He’s sharply loyal and studious, and cares deeply for his family. It’s clear that he is willing to do whatever it takes to get his sister back. He is an intelligent, skilled typist. He gets along quite well with Lemony, and their personalities and interests are rather similar.

Kellar clearly misses time before Lizzie’s kidnapping. When Snicket asks him “shouldn’t you be in school” in the book of the same name, he sadly replies “yes”, and the question hangs sadly in the air between the two boys. He wishes he could just be a kid again, and have a normal, pleasant childhood. He also tells Snicket that his mother, Sharon Haines, “wasn’t always like this”, referring to how she has turned to arson and siding with Hangfire in a desperate attempt to get her daugher back. Kellar knows that there’s still good left in his mother, but Lizzie’s kidnapping has taken that away from her. This also shows his loyalty to his family.

In SYBIS, Kellar tries to help the Associates, attempting to give them clues as to what’s going on regarding the Department of Education. This makes it clear that he wants to do good things and he doesn’t think that what his mother is doing is right. He wants to be a good person, and he wants to stand up against Hangfire to get his sister back.

Kellar lived with his mother, Sharon, and his sister, Lizzie, before Lizzie left to study acting under Sally Murphy. After a few months, her letters stopped coming, and Kellar and Sharon received word from Hangfire, who ordered them to obey his instructions in exchange for the return of Lizzie.

Upon the arrival of S. Theodora Markson and Lemony to the building of the Department of Education, Kellar motions for them to wait while typing. Lemony speaks to him, and he tries to sound occupied and busy as his mother, Sharon, spoke about Birnbaum's Sheep Barn being burned down in the middle of the night. At Lemony's words regarding his location when he's not at the library or the Lost Arms, Kellar passively gives a hint to Lemony that the latter should look up Harold Limetta.

At Hungry's, Kellar drops more hints, notably about a lime from an Italian tree that doesn't grow in Stain'd-by-the-Sea and how his mother speaks Italian. Dismayed at Lemony's inability to catch on, he left the restaurant.

Lemony then discovers Kellar's typed sheets in the empty building of the Department of Education, which were comprised of only "look busy" as the words in various punctuation styles. Upon realizing that there is no Harold Limetta and no Department of Education, as Stain'd-by-the-Sea only has one school, Lemony and his associates were confronted by Sharon and Hangfire, who opened the closet door to reveal a very frightened Kellar. They dragged him, Moxie Mallahan, Cleo Knight, and Jake Hix into the 'Department of Truancy' van to be taken to the Wade Academy.

Kellar, Jake, Cleo, Moxie, and Ornette Lost try to keep awake in the Wade Academy library with some bark Cleo found, having used a pass-question to determine who to let in and who to keep out. Turning on the lights upon Ellington Feint's response, Kellar comments that the food left out for them was spiked with laudanum, and that his mother was never a good cook. He then tells everyone about his sister, Lizzie, and his and his mother's reason for serving Hangfire.

After the destruction of the Stain'd-by-the-Sea library, Kellar leaves his mother and joins the rest of the Associates in Handkerchief Heights, then participates in a game of Beethoven. He lives with Moxie and her father in the Stain'd Lighthouse while his mother still works for Hangfire.

Kellar makes a plan to catch Hangfire on the train out of Stain'd-by-the-Sea, the Thistle of the Valley. He asks Ornette Lost to fold him a false statue of the Bombinating Beast and exchange it for Lizzie, before turning Hangfire over to the police. Unfortunately, Moxie had the same plan, so Hangfire catches on to the ruse. When Kellar tries to get onto The Thistle of the Valley, his mother appears to tell him to leave, but he boards the train anyway.

On the train, an unexpected stop is made, and Snicket finds Kellar on the train and tells him to go to Moxie's compartment.  Kellar and Moxie figure out they had the same plan as Snicket joins them, and Kellar reveals that hiss mother spotted him boarding the train and tried to stop him from boarding. Jake Hix and Cleo Knight arrive, and then Snicket explains that Dashiell Qwerty, the librarian, was murdered, and S. Theodora Markson was framed for the crime. He leaves them in order to meet with Hangfire.

When Snicket returns, Ornette Lost has joined the Associates, and he tells them that he met with Hangfire, and he's made a deal to exchange the Bombinating Beast statue for the freedom of his chaperone- though, of course, he doesn't have the statue. When Stew Mitchum comes to escort Lemony, Ornette leaves to find the witnesses to the murder, Cleo and Jake go to fetch the authorities, and Moxie volunteers to get Gifford and Ghede. Kellar volunteers to go with her, but Snicket instead tells him to go find Lizzie, revealing that she is in disguise with Sally Murphy a few compartments down. Following his advice, Kellar runs out to reunite with his sister.

Kellar later arrives with the other Associates to witness Snicket steal the Bombinating Beast statue and use it to summon the actual Bombinating Beast, before feeding Hangfire to it. When the train stops, Kellar and his family sit outside while Snicket explains the mystery that had unfolded in the town. He says he hopes Lizzie and Kellar learn from the mistakes of their mother, and he knows that they are going to help each other. The last Snicket sees of Kellar is of him and Lizzie sitting on the fender of the Bellerophon taxicab, smiling and talking to each other.

Lemony described Kellar as a boy about his age with his hair trimmed into a sort of tilted spike, like the fuse on a stick of dynamite. In an illustration, he is shown wearing a bowtie and a coat.

Kellar at the Department of Education. 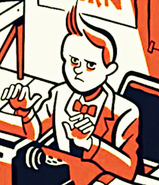