The Lachrymose Leeches are deadly leeches named after the lake that they call home.

They have six rows of very sharp teeth and one very sharp nose. They can smell food from extreme distances though according to Josephine Anwhistle, they are blind, thus probably an explanation to the attacks on humans who have recently eaten. Illustrations show that they have long segmented bodies with two fins that circle their bodies at the neck and middle. They normally feed on small fish and crabs, but will devour human beings if they smell food on a person. Thus, anyone traveling on the lake is advised to wait one hour after eating before entering the lake for any reason.[1]

Known victims of the Leeches are Ike and possibly Josephine Anwhistle, since it is unknown if Josephine is alive or fallen victim to the leeches. Ike only waited 45 minutes before swimming. He thought that was enough (he should have waited 1 hour). 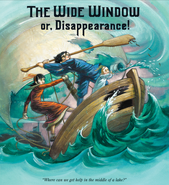 The Baudelaires trying to survive the leech attack. 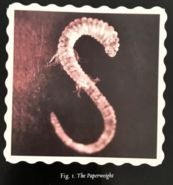 A swarm of Lachrymose Leeches.