Larsen is a resident of The Island.

Weyden: I arrived on a raft of books myself.
Professor Fletcher: But you abandoned them.
Larsen: She did nothing of the sort! You helped her hide them, so you could force those children to read!
Friday Caliban: We wanted to learn to read!
—Chapter Eleven

It is unknown how Larsen came to The Island nor why she chose to stay. Her job on the island is to catch fish with Ferdinand using nets so that Miranda Caliban can use them to make ceviche.

She somehow discovered that Professor Fletcher had hidden Weyden's books and taught the children of the island how to read. She disagreed with this, believing that Fletcher was forcing the children to read.

While storm-scavenging the day that Violet, Klaus and Sunny Baudelaire wash ashore, Larsen finds a lawn mower, which she takes to present to Ishmael. He suggests that it is useless, as the beach does not have lawns that need to be trimmed. Larsen agrees and puts the mower on the sleigh for the sheep to take to the arboretum.

She is among the crowd of islanders who go storm-scavenging the day that Count Olaf and Kit Snicket wash up ashore, with Kit on a raft of books. Though Olaf claims to be Kit Snicket, Larsen easily sees through his disguise and believes Friday Caliban's insistence that he is a wicked person, telling Olaf that he will not be welcome on the island. The colonists leave to get Ishmael to decide what to do with Olaf, leaving him under the watch of Friday and the Baudelaires. She is likely still in the crowd when they return and Ishmael suggests that the Baudelaires, Olaf, and Kit Snicket be banished, and they abandon them on the coastal shelf.

When a mutiny breaks out over breakfast on Decision Day, Robinson is seen tugging his beard at Larsen. As secrets are revealed, she reveals that Fletcher taught the children to read, and the colony descends into argument until Count Olaf arrives, proclaiming himself king of the island. Ishmael shoots Olaf with a harpoon gun, which releases the Medusoid Mycelium hidden under his robe. Larsen argues that this is Olaf's fault, as he brought the fungus into the tent, and Olaf responds that he can't be at fault as the king.

It is unknown if she met her fate by being poisoned by the Medusoid Mycelium. It is noted that the Incredibly Deadly Viper followed the boat with an apple, and as the Baudelaires did not know this, it is possible some islanders survived to report this to Lemony Snicket. Friday knew the snake to be friendly, and thus may have taken the apple from it; however, it is unknown if she would have been able to convince Larsen or the drugged islanders to eat it. 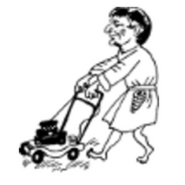 Larsen with the lawn mower in the Russian illustrations.