General store
Last Chance General Store is a general store located in the Hinterlands which is practically in the middle of nowhere. They do have a telegram service though. It appears in the book The Hostile Hospital and in its TV series adaptation.

It also appears in the film, renamed The Last Chance Superette, and is located by train tracks.

The owner of the store is Milt. In the movie, there is a grocery clerk who may be Milt, although it is unclear.

In the film, Count Olaf parks the Baudelaires on the nearby train tracks. He enters the store and waits inside pretending to browse while he waits for a train to kill them.

It is described to be "covered with fading posters that advertised what was sold."[1]

Possibly Milt.
Add a photo to this gallery 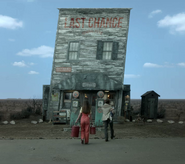 Last Chance in the TV series.

Milt in the TV series.
Add a photo to this gallery
Retrieved from "https://snicket.fandom.com/wiki/Last_Chance_General_Store?oldid=65240"
Community content is available under CC-BY-SA unless otherwise noted.