Lemony Snicket Wiki
Register
Don't have an account?
Sign In
Advertisement
in: Pages with inline Wikipedia links, ASOUE, Book characters only,
and 8 more

Madame Nordoff is an islander in A Series of Unfortunate Events.

It is unknown how Madame Nordoff came to The Island nor why she chose to stay.

While Madame Nordoff lived under Ishmael's rule on the island, she secretly did not follow all of his rules; Finn taught her how to yodel in exchange for supplies of batteries, which she kept instead of sending to the arboretum as suggested. Dr. Kurtz somehow discovered this.[1]

Weyden: I arrived on a raft of books myself.
Professor Fletcher: But you abandoned them.
Larsen: She did nothing of the sort! You helped her hide them, so you could force those children to read!
Friday Caliban: We wanted to learn to read!
Miranda Caliban: You're reading?
Madame Nordoff: You shouldn't be reading!
Dr. Kurtz: Well, you shouldn't be yodeling!
—The End

While storm-scavenging the day that Violet, Klaus and Sunny Baudelaire wash ashore, Madame Nordoff finds a checkerboard. At Ishmael's suggestion, she gives it to the sheep to take to the arboretum.

Madame Nordoff is in the crowd of islanders when they find a raft of books and Count Olaf. When it is suggested that Friday Caliban stay behind to guard him and the newly-arrived Baudelaires, Nordoff adds that she would like to refill her nearly-empty vial of coconut cordial when they return to camp. The others murmur in agreement. She is likely still in the crowd when they return and Ishmael suggests that the Baudelaires, Olaf, and Kit Snicket be banished, and they abandon them on the coastal shelf.

When the schism breaks out on Decision Day, Madame Nordoff is seen ready to begin wrestling with Rabbi Bligh in the sand. When it is revealed that Professor Fletcher has been teaching the children to read, Nordoff exclaims that the children shouldn't be reading. As the mutiny continues, she is likely the islander who, amidst the chaos, suggests yodeling.

Count Olaf arrives, and when he says that there is a difference between him and Ishmael, she guesses "eyeliner." Ishmael shoots Olaf, releasing the Medusoid Mycelium, which poisons the islanders; Madame Nordoff, who had thought they were simply being threatened with forbidden food, is panicked.

It is unknown if she met her fate by being poisoned by the Medusoid Mycelium. It is noted that the Incredibly Deadly Viper followed the boat with an apple, and as the Baudelaires did not know this, it is possible some islanders survived to report this to Lemony Snicket. Friday knew the snake to be friendly, and thus may have taken the apple from it; however, it is unknown if she would have been able to convince Madame Nordoff or the drugged islanders to eat it.

Sherman: Friday, you guard Olaf and the Baudelaires, while the rest of us will go fetch our facilitator.
Madame Nordoff: And some more coconut cordial. I'm thirsty and my seashell is almost empty.
—Chapter Six

Count Olaf: Thank you, but there's another important difference between me and this foolish facilitator.
Friday Caliban: Your tattoo?
Count Olaf: No. If you were to wash the clay off Ishmael's feet, you'd see he has the same tattoo as I do.
Madame Nordoff: Eyeliner?
Count Olaf: No.
—Chapter Eleven 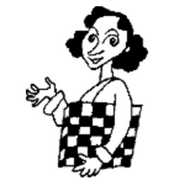 Madame Nordoff with a checkerboard in the Russian illustrations.