The Mallahan Family are a family of journalists who live in Stain'd-by-the-Sea.

Lady Mallahan is a legendary figure in Stain'd-by-the-Sea, who is claimed to have slain the Bombinating Beast, a monster that would haunt the sea and eat the residents of the town. While the legend has been questioned, the Mallahan family have had a Bombinating Beast collection passed down throughout the family.[2]

The Mallahans eventually created a newspaper named after their family home, The Stain'd Lighthouse. The Bombinating Beast became a mascot for the paper, and it is known that both Mr. and Ms. Mallahan were journalists. (It is currently unknown which of them married into the Mallahan family and which was a descendant of Lady Mallahan.)

After Ms. Mallahan abandoned her family, Mr. Mallahan fell into a depression, and their daughter, Moxie, took over journalistic responsibilities of the town.

The family is noted to have been friends with the Sallis family for generations.[2] 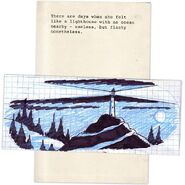