Inbetween The Reptile Room and The Ersatz Elevator[1]

The Mamba du Mal is a highly venomous snake. One of its kind was known to be once a part of Dr. Montgomery Montgomery's collection.

The Mamba du Mal is "one of the deadliest snakes in the hemisphere," and are capable of killing its victims by strangling them, leaving dark purple bruises.

The snakes are also capable of communication given that it was trained by V.F.D. to send vital messages. This was evidenced by the following excerpt from The Mamba du Mal: A Snake That Will Never Kill Me by Tony "Mommy" Eggmonteror.[1] The snakes can recite certain phrases in English, such as "summer is" (enemies are nearby), "over and gone" (probably in disguise) or "dying" (beware of arson).

Count Olaf used the Mamba du Mal's venom to kill Monty Montgomery. However, while the injection site looked like a snake bite, Klaus Baudelaire noticed that Monty did not have any bruises. This proved that the Mamba du Mal was not responsible for Monty's death.

The snake is packed up with the rest of Monty's collection by Bruce from the Herpetological Society.[2]

The Mamba du Mal is killed by unknown means, and its body (which is now framed) is auctioned off to the "Esmé Squalor Fan Club" at the In Auction. The Fan Club are known as associates of Count Olaf.[1] 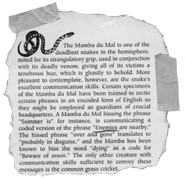 Illustration in the Netflix Adaptation.